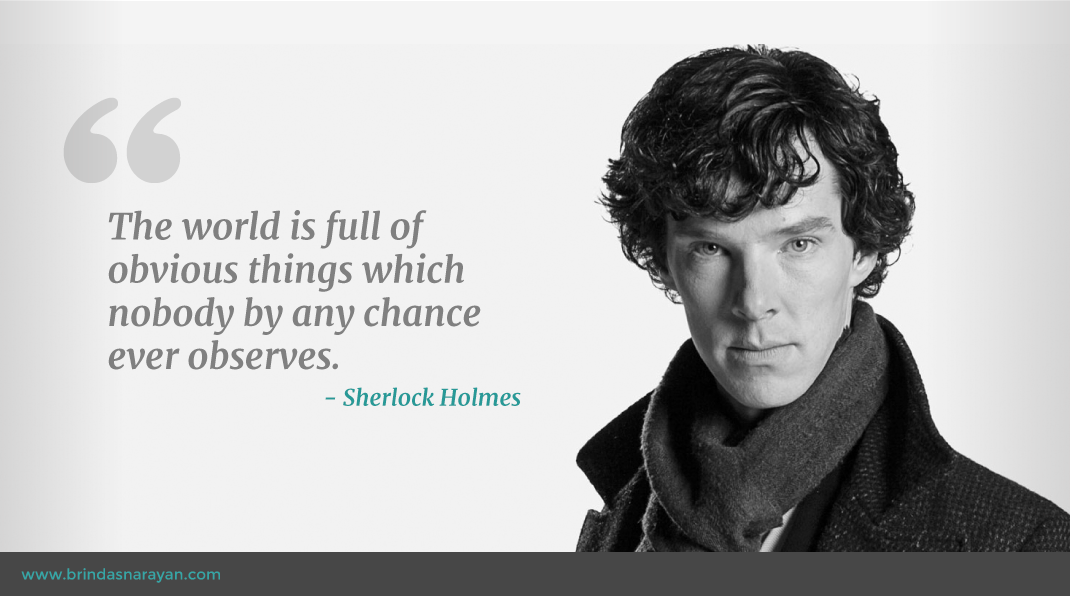 Habits of Highly Creative People: What You Can Learn From Sherlock Holmes

Today 221 B Baker Street houses a museum. Sherlock Holmes, one of the most enduring literary characters created by a 20th Century author, still commands a massive and ardent following. He is so deeply woven into our collective imagination, that some people believe that he was a real historical figure. The four novels and fifty-six short stories spun by Arthur Conan Doyle have inspired countless spinoffs – other novels, plays, movies, short stories and TV series. Fan societies persist in countries as far-flung as the U.S., Australia and India. Even in 2018, the Baker Street Irregulars gather in New York while The Sherlock Holmes Society convenes in London. The Society in Japan has more than 80,000 members.

While Holmes is mostly reputed for his logical and deductive reasoning powers, there is no denying that imagination played a significant role in sparking his “Aha” leaps. In her book, Mastermind: How to Think Like Sherlock Holmes, Maria Konnikova expands on how his creative powers derived from special attributes of his distinct persona.

Holmes pays an almost fanatical attention to certain details about his clients or about the crime scene, details that many other people including the less observant Watson or the bumbling Scotland Yard inspectors overlook. On people, he notes tattoos and ink stains, mud crusted over shoes, their nervous or agitated demeanors, their physical conditions.

What is relevant is that he doesn’t take in everything. He takes in the stuff that matters, the standout aspects that eventually lead him to his imaginative conclusions. Such absorption of telling sensory details is driven by his own deep and obsessive interest in solving the case and by his highly-developed intuition.

Holmes uses all five senses to gather his information. He sniffs the air, attends to a sound, or fingers something in his theatrically deliberative style. In the corporate environment, visual data about problems usually get more attention than the data gathered by our other senses. Equally, we should hone our abilities to filter the most striking findings from any data gathering process just like a sharp doctor learns to look for or listen to the most pertinent details about a patient’s case.

Holmes does not limit his data gathering to official accounts or tedious police reports. In fact, he imaginatively uses tip-offs from street boys, the Baker Street Irregulars, who offer him a perspective that his well-heeled clients or trained policemen cannot.

In a New Yorker article (2015) that profiles a Sherlock Holmes fan, basketball player Kareem Abdul-Jabbar explains how he used this aspect of Holmes to sharpen his own game. Instead of only limiting his vision to tips received from coaches and other team members, he also started picking up tips from the ball boys. This gave him insights that other players lacked and hence a much-needed edge on the game.

Similarly, salespersons or other client-facing personnel can interview office boys, or cafeteria workers or security guards for insights into a target company or problem area. If you have to think differently from the competition, you also have to feed your mind with unusual insights.

Learn about Other Fields

Many corporate executives read self-help books or business books. There are, of course, a few that delve rather deeply into other subjects. But given time constraints and the increasingly utilitarian approach to learning – how will I gain from this knowledge? – many people are skirting over an opportunity to deepen their own creative capacities.

Holmes’ sometimes fantastical conclusions were driven not only by the data he gathered, but also by enormous store of fascinating ‘trivia’ contained in what he called his ‘brain attic’. Holmes conceived of his own brain as a physical space, as many of us do, and also cautioned Watson to be careful about filling it with junk or trash. Yet he himself seemed to store all kinds of quirky details about the world we inhabit, hence enabling leaps that other people were unable to achieve. In an article in The Atlantic (2013), Konnikova points out that his mind space not only contains “jellyfish that kill” but “obscure paintings, tomes on bee keeping and discussions of philosophy.”

To expand employee creativity, organizations might want to create forums to usher other forms of learning. For instance, reading narrative non-fiction accounts about worlds that are rarely explored or even popular history or science books. Or given time-constraints (or attention shortfalls) that preclude reading, listening to cultural or social podcasts on offbeat topics might enable breakthrough ideas that would elude the mainstream thinkers.

One of the less noted aspects of Holmes’ persona, is his proclivity to reflect quietly on his problem, often while puffing on his iconic pipe. He is, as Konnikova observes, not just a man of action, but of deliberate inaction. In fact, when faced with a particularly tricky problem and Watson suggests gadding about the city to find its solution, Holmes remarks that it only requires the “three pipe solution.” In other words, Holmes needs to spend time alone with his meandering mind, for as long as three smokes, to arrive at the solution.

When organizations demand immediate solutions, especially in the form of rapid-fire suggestions at group meetings, moments for quiet and solitary reflection may be lost to thinkers. Creative groups should ensure they provide such opportunities, preferably in green spaces, as interactions with nature are also known to ignite the imagination.