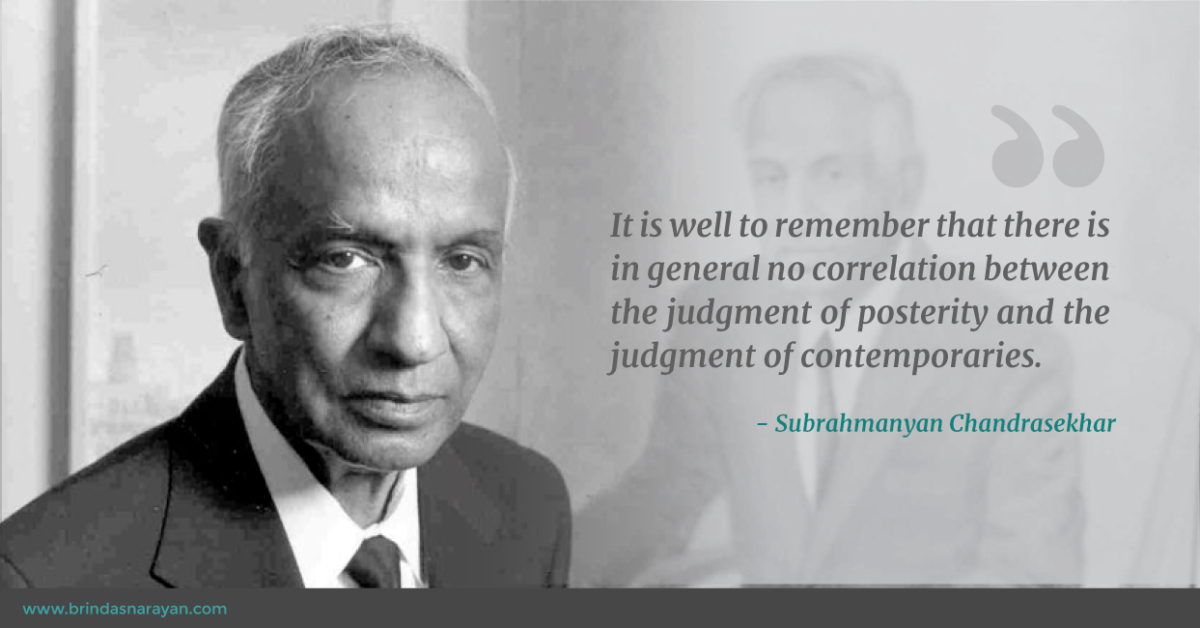 Habits of Highly Creative People: Learn To Transcend Humiliation from a Nobel Laureate

Many creators are told to steel themselves for rejection. However, most people expect to receive due credit for their work or talents after a reasonable period of struggle or anonymity. But what if that period were to last fifty-three years? What if a discovery you made at the age of 19 was to be adequately recognized only when you reached the age of 73? Can you still plod through the interim years, with grace, diligence and passion like the brilliant astrophysicist Subrahmanyam Chandrasekhar?

You Have to Keep Creating Even in the Absence of Recognition

Subrahmanyam Chandrasekhar was only 19 years old, when he made what was to become one of the most significant discoveries in astrophysics. He was on the deck of a ship that was bound for the U.K, where he was headed to become a researcher. The year was 1930 and India was still a colony of Great Britain. It was also coincidentally, the year when C.V. Raman, who was Chandra’s uncle, was awarded the Nobel Prize for discovering the Raman effect.

Chandrasekhar’s finding, based on a series of mathematical calculations, was that stars that were much more massive than the sun would not remain white dwarves in their end states, but would instead collapse, under the tugs of their own gravity into infinitesimally dense tunnels of space-time from which even light could not escape. Such warps in the universe would eventually be termed black holes.

After making such a brilliant and imaginative leap, Chandrasekhar could hardly wait to share his exciting discovery with receptive minds at Trinity College, Cambridge, which was to be his academic abode. However, a different fate awaited the young scientist. At Cambridge, where he spent the next few years developing and elaborating his idea, he was encouraged by the interest of Arthur Eddington, a formidably reputed scientist who was also known as the founder of astrophysics.

Eddington encouraged Chandrasekhar to present his paper at Royal Astronomical Society at a large international conference. Chandrasekhar agreed, though he was puzzled by the fact that Arthur Eddington was slated to deliver a talk on the same topic following his own. Nonetheless, the young protégé explained his conjectures to an audience consisting of some of the most eminent physicists and astronomers of that time.

After Chandrasekhar presented his paper, Eddington took to the stage and completely ripped Chandrasekhar’s theory to shreds. Moreover, he did so in a manner that denigrated Chandrasekhar, reducing his years of hard toil and intense calculations to the absurdist notions of someone with a fantastical but unrealistic outlook. Unprepared for a such a sarcastic takedown of his work, by a mentor whom he revered, Chandrasekhar felt humiliated and hurt. Though other reputed scientists did endorse Chandrasekhar’s calculations, the Indian scientist’s finding did not receive due recognition.

It would take the world many more years to formally prove that Chandrasekhar had in fact been right. The existence of black holes would be confirmed only in 1972, though Chandrasekhar himself would be awarded the Nobel prize for his finding only in 1983, more than fifty years after he first arrived at his insight.

Yet despite the intense disappointment and frustration he must have experienced at the lack of recognition, Chandrasekhar emigrated to the United States and spent several productive years at Yerkes Observatory at the University of Chicago. At Chicago, he spent each decade tackling different fields in astrophysics, ranging from the radiative transfer of energy to the movements and atmospheres of stars, from Einstein’s theory of relativity to black holes and hydrodynamics. He published more than 200 papers and at least ten books. He was even gracious about the scientific contributions of Eddington, despite acknowledging that racism and other power structures might have played a role in squashing his own work.

Given that we currently live in a more materialistic era, creative people, whether they be founders of companies, R&D teams or artists, need to struggle even harder to persist in the absence of recognition. And to also believe in themselves despite the absence of external validation. This is even more difficult when a powerful or very reputed person shatters your worth at a public forum. But you have to take heart from lives like Chandrasekhar’s, from people who did not forsake their quest even in the face of the most intense and long-lasting disappointment.

As a Student, do not give undue regard to Prizes and Authoritative or Institutional Judgments

Often, in some of the world’s most reputed universities, it is difficult to even get standing space in a classroom that is taught by a Nobel Laureate. The prize still carries significant cultural heft, and especially in the sciences, where the awards are perceived as objective measures.

At the University of Chicago, where he spent most of his working life, Chandrasekhar was a dedicated teacher. But as discussed earlier, his own work had not yet been recognized by the Nobel Committee until much later. Besides, the course he taught wasn’t in one of the more popular or faddish areas of science at that point. There was a period, when there were only two students in his classroom, but still the dedicated Chandrasekhar drove nearly 200 miles roundtrip, through snowstorms to teach those two students.

As it happened the two students, Tsung Dao Lee and Chen Ning Yang won the 1957 Nobel Prize in physics. Later Chandrasekhar, the teacher, also won his long overdue Nobel in 1983. Essentially, the other students at the University of Chicago had skirted an opportunity to interact with three great scientific minds and future Nobel Laureates in an intimate setting.

In other fields too, prize winners or market leaders or bestsellers are given more attention by the public. This is inevitable. But as a student or creator in a field, try to judge a person’s worth by their work, and don’t always get blinded by their external accolades.