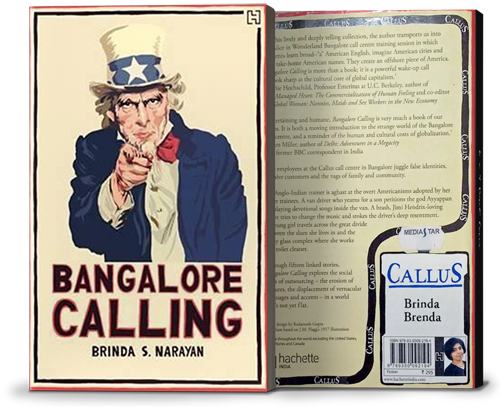 The call centre that day was like the fairyland Bitty dreamt of in school. ‘Cool, man, like movie sets,’ someone said. The special Valentine décor, funded by a generous company allowance, surpassed Diwali razzmatazz on the sari street. The glass doors were eclipsed by heart-shaped wreaths, more extravagant than wedding flowers. Walls normally filled with humdrum announcements – ‘This Week’s Best Agents’ or ‘Special Incentive for Super Achievers’ or ‘From the CEO’s Desk’ – were plastered instead with L-O-V-E garlands, with heart ornaments, with pink arrow-wielding babies that Akriti said were ‘sweet Cupids’. The electronic wallboard, which usually flashed irksome warnings about ‘Calls in Queue’ and ‘Disconnects’ floated among helium-filled Barbies. And moreover, every cubicle had a box of heart-shaped chocolates with a card from the management saying ‘Happy Valentine’s Day’. It was 4:00 a.m. in Bangalore on the next day, but that wasn’t the point. It was Valentine’s Day in America.

Bitty excitedly ripped open her gift-wrapped chocolates. Across the main aisle, the Callus CEO, a handsome, bearded man she sometimes glimpsed from a distance, escorted a prospective American client inside the profusion of pinks: ‘We really try to make them feel a part of the culture,’ he explained. ‘Look at this place today! I’m sure Sears or Wal-Mart doesn’t look better. And when customers greet them with a ‘Happy Valentine’s Day’, they’ll share the feeling, not respond with an “Aah? I don’t know what you mean”.’

Bitty was assigned that week to an internet service provider’s account. ‘You have to take down change requests,’ the Team Leader had said. ‘This is a pilot phase where the client is assessing our capability, so be extra polite.’ Bitty wasn’t familiar with the script but most calls were easy; internet subscribers merely wanted the job done quickly. Her eyes fixed on the computer screen, where the script flickered at the bottom, Bitty read out the greeting: ‘Good evening, this is Columbus Instant Connect, we appreciate your calling us today, can I have your first name and last name please?’

She heard footsteps in the adjoining aisle. ‘Listen to these agents, live on the phone. They compare with the best in America,’ said the CEO, and before the agent had registered his words, he ushered the American lady into Bitty’s cubicle. She could hardly attend to the headset voice. She fumbled while confirming the caller’s first and last name.

The agent tried to hide the tremor in her voice. They hadn’t warned her, yesterday or earlier tonight, about intrusions into live calls. It was one thing to have a foreign voice at the other end but another thing entirely to have a foreign face watching your movements. Distracted by the shuffle of black stockings near her desk, she wasn’t sure later if she entered the account number incorrectly or if her pronunciations were too Indian, but while Bitty said, ‘Sure, we can do that sir. Just give me a few minutes while I retrieve your account,’ the American client sprang from her seat and ripped off her listening headset, face blanched.

‘Several calls later, the Team Leader hauled Bitty in for a private meeting. ‘Bitty, what the hell, you messed up when the firang female side-jacked your calls. CEO’s pissed, Area Manager’s on fire. What did you say?’

‘I didn’t do anything,’ said Bitty. ‘I was reading from the script.’

‘Maybe that’s the problem. Americans don’t like agents reeling out scripts. You should learn to speak naturally.’