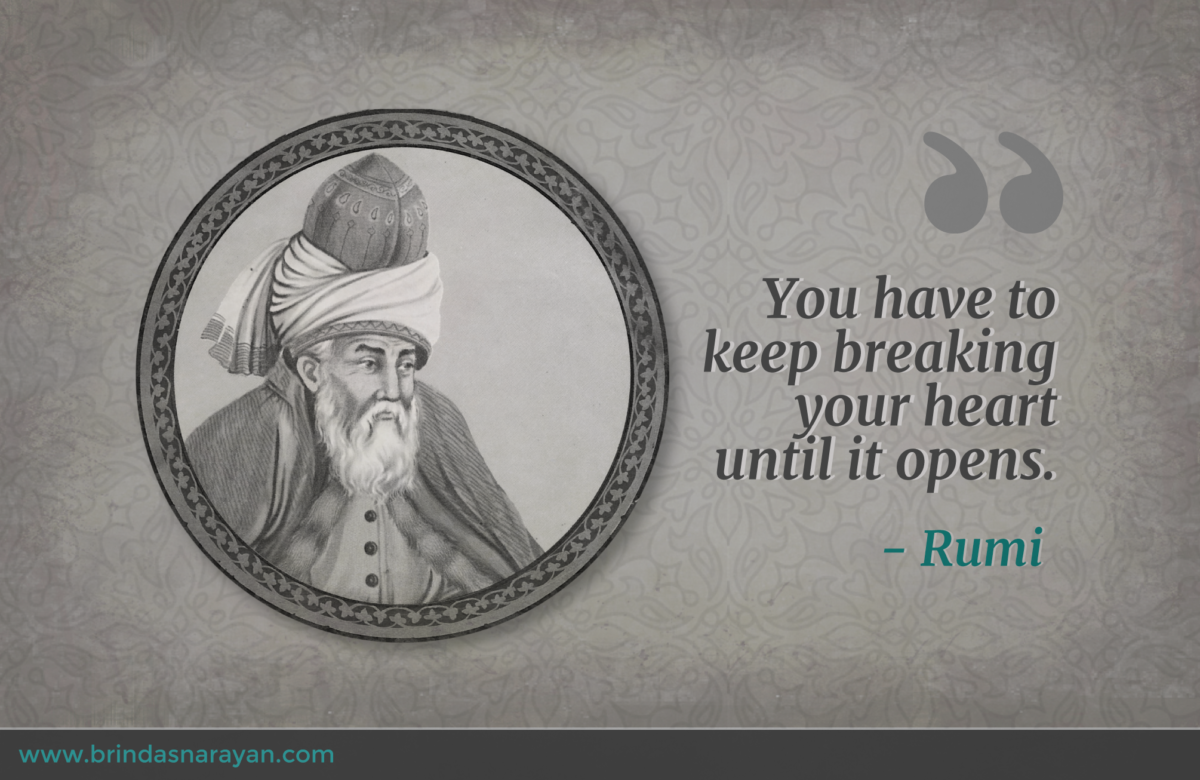 Creativity, to begin with a cliché, is often considered an exercise in ‘thinking outside the box.’ The phrase, however hackneyed or tired-sounding, does urge one to shatter boundaries, a necessary step to usher newness or innovation in any sphere. My quibble, however, is with the word ‘think.’ It seems to denote that creativity is primarily a cerebral exercise, one in which the intellect is ordered to willfully wander into new terrains. What it fails to encompass is the role of feelings, some consciously cultivated, others involuntarily experienced, in fostering creativity.

We can see this play out in the life of many great creators, both historical and contemporary. In particular, recent works that shed light on Rumi, the 13th Century Sufi poet, emphasize the seeding of emotions – intense and variegated – as a necessary precursor to high creativity.

When Even Oprah features Rumi

The Tennessee poet Coleman Barks, has been instrumental to the rising popularity of the Sufi master. Barks converted Rumi’s poems into a style that would appeal to an American audience, drawing from the free verse of Walt Whitman and the attentive wording of Emily Dickinson.

Rumi currently features among the bestselling poets in America. His poems are read at weddings and funerals, and have even filtered into a Coldplay album released by Chris Martin. Beyonce and Jay-Z have named one of their twins ‘Rumi’ and Beyonce’s mother, Tina Knowles, professed her love for his poems on Instagram. Oprah propagated the mystical verses on her Belief channel and on her talk-show program, Super Show Sunday. The designer Donna Karan had Rumi’s words read out at a fashion show.

Such a large and growing fan following has naturally led to an intense curiosity about the man who gave rise to such emotionally-appealing poetry. Who is Rumi? How could such an ancient poet’s work mesmerize a vastly different time and culture? Drawing from scholarly material, the Turkish author ElifShafak, reimagines Rumi’s life, and more significantly, his relationship with Shams of Tabriz, a wandering, wild-eyed dervish in her historical-fiction novel, The Forty Rules of Love.

Rumi spent most of his life in Konya, Turkey. Konya, today, has morphed into one of the more conservative cities in Turkey, a place that might not attract liberal, secular, Western-oriented Turkish people, who would prefer to shun headscarves or other forms of religious orthodoxy. However, in Rumi’s time, Konya was a bustling place, a capital of the Seljuk empire. It was filled, like all other throbbing urban centres, with the lures and seductions of a diverse metropolis. Shafak describes its taverns (frequented, unsurprisingly, only by men, in those times) spilling forth their drunks into the city’s dark alleys, its brothels where women have to deploy deceit and political cunning to evade their owners, its madrassas where religious zealots impose firm strictures on fearful students, its mosques where men congregate to listen to scholarly preachers. As a significant stop on the Silk Route, the city attracted people from a multitude of faiths: Jews and Hindus, Christians and Buddhists.

Till Rumi encountered Shams, he used to be a highly-respected scholar and seminary teacher, husband and father. Given his high social standing, he was expected to behave in circumscribed, socially-acceptable ways. While his erudition was admired, he was also known to be good and kind-hearted. Yet, in Shafak’s account, something seemed to be missing from his life. But he had not foreseen the manner in which his life would be reshaped by the entry of a carefree visitor into the city.

Shams, being an itinerant mystic, does not subscribe to rigid social or religious norms. Before meeting Rumi, he deliberately mingles with ordinary people, and especially those who are ostracized or stereotyped by society. He associates closely with a beggar, a prostitute and a drunk, “the kind of people that the scholars failed to see while sitting in their ivory towers.”Shams wonders if Rumi, like other scholars who are often trapped in their own erudition, is blind to the city’s discards. If so, he is determined to be the conduit between the learned man and the disreputed.

Eventually, when the dervish and Rumi do cross paths, Shams tests the scholar’s willingness to receive his Love. Rumi, shaken by the dervish’s penetrating gaze and questions, cloisters himself with the stranger, for forty days. In that time, Shams transmits the Forty Rules of Love, aiding Rumi’s climb to higher levels of mystical understanding.

Shams also invites the prostitute into Rumi’s home, urges Rumi to visit a tavern and buy wine (an act that would have been considered blasphemous to the scholar), persuades him to beg, in the shoes of a leper, across from a mosque where he used to be a respected preacher.To further diminish his past identity, Shams submerges Rumi’s favorite books in water. As Rumi recounts, “Before, I had plenty of admirers; now I have gotten rid of the need for an audience. Blow after blow, Shams managed to ruin my reputation.”

Yet, Rumi is entranced by the new depth of feeling awakened inside him. Only when Shams eventually leaves the scholar, a heartbroken Rumi turns into the poet that the world still adulates.

What is fascinating about Rumi’s story, is that he needed to experience deep feelings – love (for Shams), shame (at entering a tavern or hosting a prostitute), distress (when his books were destroyed), humiliation (when asked to turn into a beggar), grief (when Shams departs) and more than anything else, empathy with the Other. Rumi needed to enter alien worlds and new emotional terrains before becoming an instrument for the moving Masnavi, an epic poem that straddles six books, his ghazals and his rubaiyat among others. Significantly, he needed to detach himself from his intellectual or scholarly past, witnessing the drowning of his favorite books by the mischievous dervish.

Rumi’s followers lose themselves in the entrancingSama, performed by whirling dervishes, with one hand pointed at the sky to receive divine Love, and the other directed towards the earth, to transmit the feeling to our planet’s inhabitants.

His poetry depicts the many shades of love, and the variegated colors of human experience, without passing any judgment on acts undertaken by diverse beings. In his poem titled, The Wandering Elephant, the poet reminds us:

Whatever customs humanity had
Becomes waves of compassion.
Nothing with shape and dimensions can keep still when passions move.
Start your lives over.
Everyone is totally forgiven, no matter what.