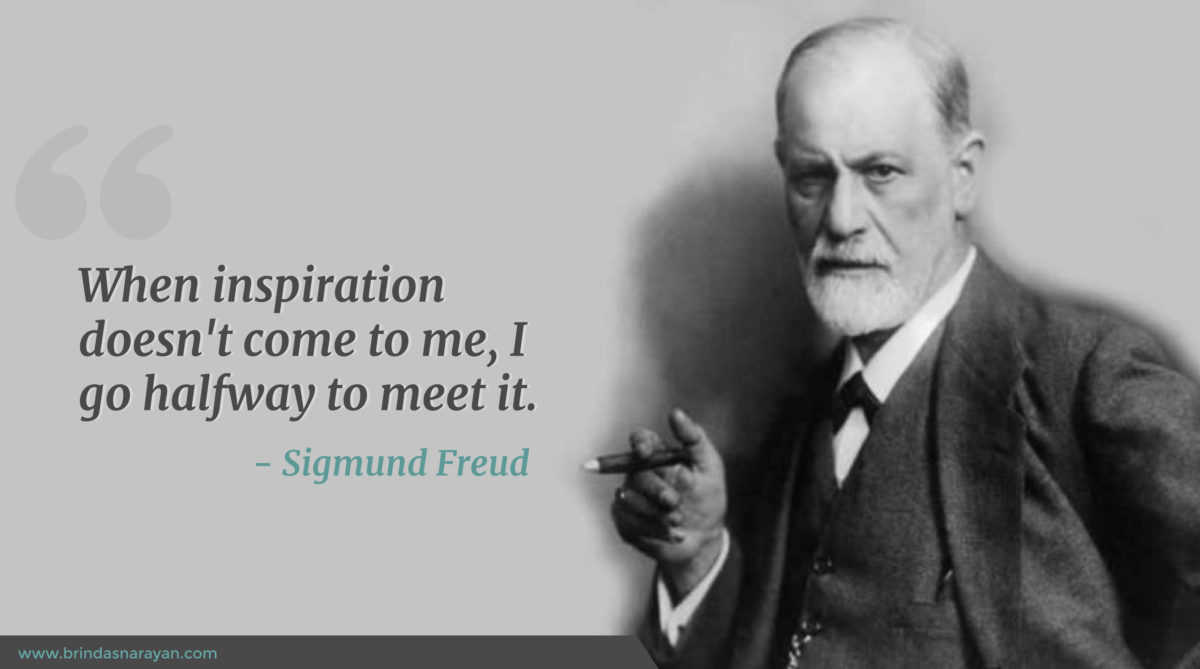 Habits of Highly Creative People: What You Can Learn From Sigmund Freud

Unlike many other great creators, Freud succeeded at school. According to Howard Gardner in Creating Minds, he had the kind of prodigious brain that could have mastered any of a diverse range of fields. But after gaining a medical degree, he deliberately chose not to establish a practice, because his greed for knowledge superseded his desire for respect inside Viennese circles.

Even later, his choice of domain was a risky undertaking. He could have studied other domains that already had established pathways to success, but he chose to undertake the fraught journey of establishing a new domain, driven by the questions that piqued his imagination.

Creative individuals need to evaluate lives (and resumes) not just by the manner in which status is progressively enhanced, but rather by the cumulative gathering of interesting experiences.

Muses can be closer to You than you Think

For some creators, travel and encountering new people or places can stoke their imaginations. But Freud discovered something seminal by merely examining the substance of his dreams, his own hidden drives and masked feelings. This material was available to anyone in the world, at any place or moment in history, and yet it was Freud who became fascinated with what was so abundantly available.

Life, even in all its mundane aspects, can be your muse, as also the products or processes that constitute your ‘boring’ work. Moreover, you need not be in the creative fields in order to come up with new ways of doing things. Equally exciting breakthroughs can be made in Accounting or Procurement or Human Resources, in functions that often tend to ossify around the belief that “this is the way it’s always been done.”

The Tools of Creativity Can be Startlingly Simple

As a creative person, you don’t always need a large, complex lab (though in some cases, you do), or even access to the right institutions, peer groups and support networks. Often, constraints and boundaries (self-imposed or imposed by circumstances), can lead to higher levels of creativity than the untrammeled access to resources and people.

Be Open to Mid-career Shifts

After completing his medical degree, Freud conducted research in neuroanatomy. He examined cells and living organisms and did reasonably well in the field, though he wasn’t intensely stimulated by the work.

Later, at a hospital stint in Paris, he encountered patients with various form of hysteria, an experience that was to stay with him and spark off his future thinking. But even this experience was to result in his major work – The Interpretation of Dreams – only much later in his life, after he had already started feeling somewhat like a failure.

Organizations may want to consider hiring people who are shifting into business or mainstream careers after a first career as an entrepreneur, artist, musician, photographer or writer. After all such people may infuse the workplace with new perspectives, that younger people who have only experienced the business environment would lack.

Between graduating from the gymnasium and acquiring his medical degree, Freud read voraciously and almost indiscriminately. He read the Bible, Shakespeare, ancient classics, Goethe, Cervantes and Moliere. He also mastered English and French and taught himself Spanish. He intensely studied philosophy with a professor, attended art exhibitions and watched plays.

More interestingly, he was equally fascinated by everyday anecdotes about family members and friends. He often offered advice to people about handling tricky interpersonal situations. In other words, he was as steeped in “gossip” as he was in scholarly works.

In a modern context, sources of inspiration can be multiple and varied. A TV show, a video game, or even long meandering chats with a friend can spark off ideas. Once you have devised an interesting question, solutions may emerge from many places, and in many forms. Not just from well-regarded, deep scholarly works, but from Page 3 columns, films, comics, and the recently much-maligned WhatsApp forwards.

Freud also went through slack periods in his life, when he was personally dissatisfied with his lack of visible output (or even any tangible signs of heading towards his goal). One such period lasted for as long as ten years. Just before he was about to embark on his biggest breakthrough – The Interpretation of Dreams – he felt he had failed to achieve much in his life.

Similarly, as a creator, you are likely to go through periods in your life where you might be distracted by financial or family concerns, and are not as prolific or as original as you would wish to be. Still, you must continue to plow ahead, since the great work or breakthrough maybe just around the corner.

“Beginning in 1902, somewhere between five and twenty Viennese men began to gather regularly on Wednesday evenings in the home of a physician-turned-psychologist named Sigmund Freud.” The gathering included physicians, a musicologist, a music critic, publisher, an army surgeon and a former glassblower. This was the gathering that would eventually evolve into Vienna Psychoanalytic Society and, ultimately, the International Psychoanalytic Society.

In today’s context, such a gathering of different minds with a shared interest in exploring the human psyche, might take the form of a Facebook group or a blog that gathers devoted followers. But even in those times, Freud had been conscious about the need to propagate his ideas and to foster a movement that would then ripple outward into the larger world.