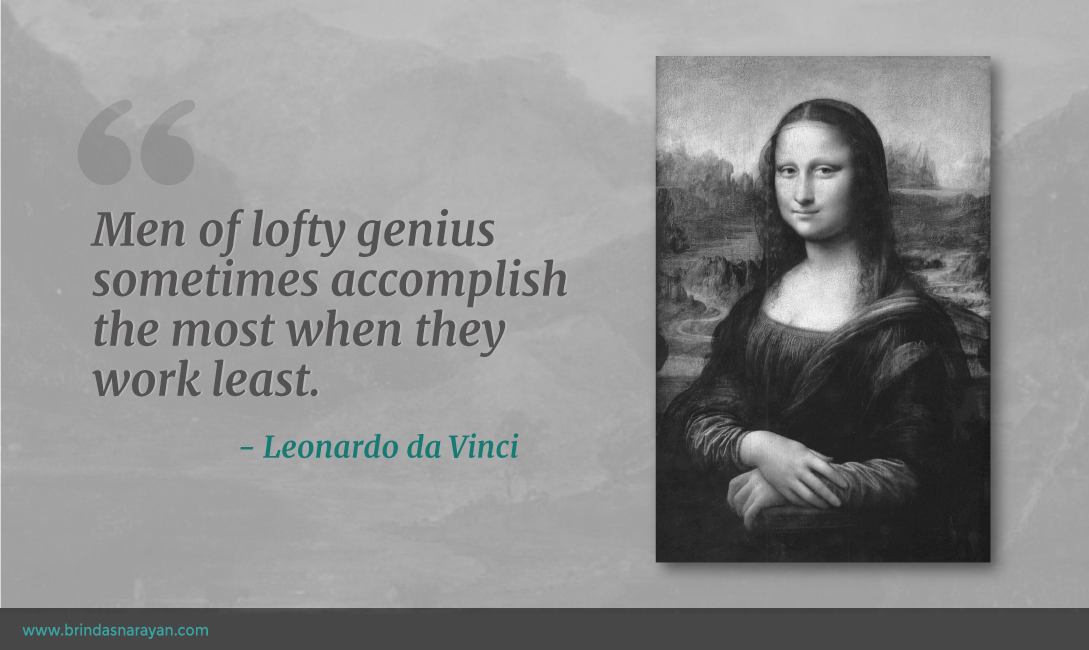 Recently, the Salvator Mundi, a painting by Leonardo da Vinci that depicts Jesus Christ as the Savior of the World, shattered auction records, selling for a stunning $450 Million. Also, last year, the meticulous and imaginative Walter Isaacson, who was commissioned by Steve Jobs to document his own life, released a new biography of the Italian Maestro. Isaacson was inspired to delve into Da Vinci’s life because of Jobs’ intense veneration of the artist, scientist, engineer, set designer, musician, chef, anatomist, botanist, geographer – the daunting list goes on.

Isaacson who has also scripted the lives of Albert Einstein and Benjamin Franklin, describes Da Vinci as “history’s consummate innovator.” Are there lessons that we can all imbibe from the multifaceted genius?

Do not Overvalue Institutional Learning

Da Vinci was born in 1452, to a peasant woman called Caterina and a notary, Piero da Vinci. Since he was an illegitimate child, he was taken away from his mother at the age of five and raised by his grandfather. His illegitimacy, rather than being a burden, freed Leonardo from expectations that might have been thrust on him otherwise – both formal schooling and the urge to become a notary. Leonardo was unschooled and wandered the Florentine countryside to study from one of the planet’s greatest tutors: Nature. He observed plants and animals and people, both their physical structures and the processes that drove them.

Leonardo never attended college either. It is perhaps, not coincidental that many other visionary founders have also dropped out of college, to embark on their ventures. After all, learning within institutional boundaries can work both ways: expand your thinking or limit it, based on the manner in which you approach it and on the nature of the institution.

Sharpen Your Senses including Your Sixth Sense

Da Vinci used his five senses to explore the world and to ask confounding questions of it till his death, at the age of 67. According the Michael Gelb, the author of How to Think Like Leonardo da Vinci, he trained his senses just like an Olympic athlete would train his muscles. While Leonardo did prize his visual sense most, he also stimulated and cultivated his other senses.

Drawing and painting for him were not just a means to express reality (and the more mysterious realms of the sacred) but also tools to sharpen his understanding and observational powers.

Since he disregarded boundaries between art and science, he used his knowledge in one realm to enrich his work in others.

His curiosity at times reached dreadful and almost appalling proportions. For instance, his paintings of people were based on intense anatomical studies. Between 1508 and 1513, he dissected more than 20 cadavers, some of which were decomposing even as he sliced into them. He studied the structures of internal organs, the underlying muscles, veins and arteries. He uncovered the workings of the aortic valve 450 years before the Western medical establishment.

Just as he ignored divisions between disciplines, he also disregarded boundaries between observation and imagination. Many of his works (including drawings for machines and other engineering projects) relied not just on what he saw, but on fantasies that he constructed.

If you walk into the Louvre in Paris, you will be struck by a noticeable charge in one of the rooms. You might even be blinded by camera flashes, as tourists from all over the world Instagram their ‘certainties’ about being photographed with Leonardo’s most famous masterpiece. Ironically, one of the qualities for which his Mona Lisa is most reputed, is the enigmatic smile on the face of the woman. Viewers are unsure if the smile is seductive or cunning, charming or innocent, ephemeral or permanent.

The paradoxical expression on her face is not an accident. Leonardo painted the lips after studying lip muscles with the skin on and off. Moreover, he deliberately created a smoky effect at the corners of the lips and eyes. These areas on a face are critical to expressing particular feelings.

He didn’t just produce mysteries. An aspect that marked out Da Vinci’s life was his willingness to live with uncertainties. His willingness to undertake very ambitious projects was premised on a willingness to abandon them. Even during his lifetime, some patrons were reluctant to sponsor him, because of his reputation to leave projects unfinished. According to Isaacson, this quality allowed him to “go down in history as an obsessed genius rather than merely a reliable master painter.”

He also committed vast blunders and staggering errors. For instance, he didn’t adequately fix the paint on The Last Supper, his iconic wall mural, so that the paint had started peeling off in a few years.

While procrastination may not be endorsed by most institutional setups, Leonardo often deliberately shirked work, even in the midst of significant projects. This trait often irked the wealthy people who had commissioned them. His response was, “Men of lofty genius sometimes accomplish the most when they work least.” Such procrastination was also driven by his perfectionism, an unwillingness to settle for the “good enough”, a quality mirrored by Steve Jobs.

Interestingly, the Wharton Professor Adam Grant, in his book Originals, also endorses procrastination as being a surprising but necessary attribute of great creators. When you give yourself a conscious break, you allow your mind to meander into more creative terrains, and discard the prosaic ideas that strike you at first.