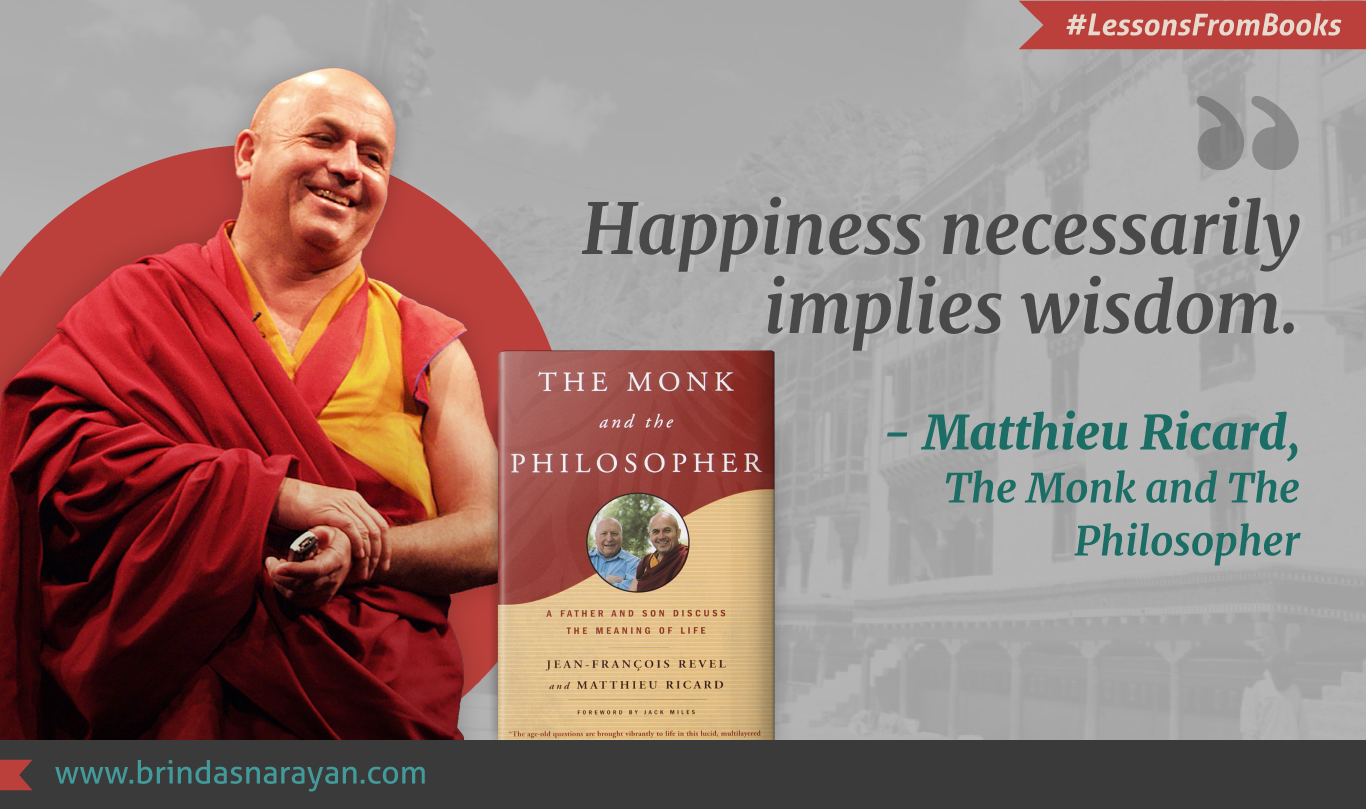 When a French Scientist, with a Doctorate in Molecular Biology, Adopts a Monk’s Path

Matthieu Ricard has always fascinated me for embodying the kind of contradictions that we writers strive to imbue our characters with. So who is Ricard? To begin with, a brilliant student who abandoned a promising scientific career after garnering a doctorate in molecular biology in 1972, under the aegis of the Nobel-prize winning Francois Jacob. A Frenchman who fled the razzle-dazzle of Paris to settle in spartan environs at Darjeeling in India, and later at Bhutan and Nepal. The son of a distinguished Western philosopher and confirmed atheist who adopted the intellectual tenets of an Eastern religion.

Of course, Ricard is perhaps a celebrity of sorts these days. After adopting the role of the Dalai Lama’s interpreter, he has received significant global visibility. His TED talk on “The Habits of Happiness” has been widely watched. But to really get into the roots of his thinking, and also perhaps to answer some of the conundrums that many of us may wrestle with, while trying to combine religious/spiritual claims with materialist/scientific principles that we have been taught at schools and colleges, you might want to read The Monk and The Philosopher. In this book, as offbeat as Ricard himself, he engages in a dialogue with his skeptical, philosopher father, Jean Francois.

At first, Francois asks his son what drew him away from a more mainstream life towards Tibetan Lamas. Ricard, who hadn’t had a religious upbringing of any kind, started reading religious texts as a teenager, encountering the ideas of Christianity, Sufism and Hinduism. While these seemed to stir his intellectual curiosity, he did not envisage the kind of deep shifts that were to occur later. At the age of 20, a friend showed him films of Tibetan masters, awarding him a close-up view of a different approach to life, from the one he had been raised in. Of some of those masters, Ricard felt: “I couldn’t quite hit on the explicit reasons why, but what struck me most was that they matched the ideal of sainthood, the perfect being, the sage.”

Till then, growing up with two very accomplished and eclectic parents (his mother was an artist), Ricard had always encountered other philosophers, scientists, poets, artists, writers and thinkers. In other words, a stimulating “cool crowd” that could sparkle at a dinner table. But, with the perspicacity and unflappable candor of a child, when Ricard observed them beyond their social pretensions, none struck him as laudable human beings. He says, “A great poet might be a rogue, a great scientist unhappy with himself, an artist full of self-satisfied pride.” With a scientist’s precision, he noted that their training and achievements in other areas did not rub off into the way they conducted their personal selves and lives.

Shaken by his friend’s films and despite not knowing any English, Ricard flew to India. This was well before the internet era. With the aid of a tiny pocket dictionary, he managed to make his way to Darjeeling, to the shack of the 70-year-old Kangyur Rinpoche. Behind the Rinpoche, the Kanchenjunga, glittering with ice and snow, soared towards melting skies. For three weeks, Ricard just sat in the presence of the lama, and felt like he received a kind of wordless intimation into human perfection and goodness.

Returning to Paris and to his scientific Institute, the memory of that encounter stayed with him. Prior to reading any Buddhist texts, he felt like he had gleaned a sense of human possibility that did not seem to radiate from his intellectual or scientist peers. Flying back a few more times to sit with Rinpoche, Ricard was instructed not to drown himself in mere texts and theory. The master emphasized that “practice” was at “the very heart of Buddhism and all inner transformation.”

In the meanwhile, he completed his PhD and the remnants of his research. Forced to take a decision then, to pursue a new line of research or to quit and return to Darjeeling, he chose to do the latter. Of course, he also realized that the spiritual path wasn’t incompatible with a scientific temperament. It was, after all, a quest too, entailing rigor, focus, discipline, observation and persistence – all necessary ingredients for a scientific pursuit. Besides both searches, despite their divergent approaches, were investigations into the nature of reality.

After many years of practice under different teachers, Ricard was formally ordained as a Buddhist monk. In their conversation, his father says that Western philosophers often dwell on “how the mind functions” but not on specific techniques to change its functioning. On the other hand, Ricard notes, Buddhism offers specific practices to counter negative emotions like anger and hatred. He brings up the instance of someone hitting you with a stick. An instinctive response would be to become angry with the aggressor. But that’s not logical, says Ricard. After all, the stick itself is not at fault. And the person wielding the stick is also a victim of his own overpowering emotions – stemming from a lack of self-control or “ignorance.” So while you might wisely move away or protect yourself, your anger is unlikely to help you or the aggressor. As he puts it, “in the last analysis, the true enemy, without any right to your pity, is anger itself.”

When Francois dismisses this as an “optimistic” view, that can hardly work under most practical circumstances, Ricard counters that such techniques are hardly as simple as they sound. They have emerged after thousands of years of practice in “contemplative science,” by many unknown (and some known) hermits, who have spent more than 20 or 30 years engaged in such techniques. While skeptics might naturally dismiss such practices, they possibly cannot “scientifically” rebuke such methods, unless they spend equal lengths of time in contemplation and observe changes in themselves. He posits that such mastery is similar to the astonishing heights a trained high-jumper might be able to effortlessly reach at the Olympics, an act that most laypersons would term as “impossible” till they see it on TV. But unfortunately, with mental achievements of this kind, there is often no demonstrable evidence that outsiders can immediately identify as a tangible payoff.

Francois contends that much of what Ricard says involves a certain level of “faith” or self-conviction, which could be termed “delusional” by rationalists. After all, most of us have a tendency to filter out evidence that might counter our personal worldviews. Ricard agrees, but he also suggests that science also entails a certain doctrinaire perspective, that assumes that there is a world “out there” that can be dissected and manipulated. While the Eastern or Buddhist approach involves a close scrutiny of the subjective nature of consciousness, the Western approach dwells on “objects” or the objective world. The Buddhists believe that subjects and objects comingle or produce each other, but the perception of this underlying reality or the makeup of consciousness requires the stopping (or detached observation) of discursive thoughts. William James, who is considered one of the founders of Western psychology, once admitted that it is practically impossible to stop one’s thoughts even for a few minutes. Ricard contends that many of the Tibetan Lamas would be immensely amused by the psychologist’s ineptitude at a skill, that had, over years, become child’s play to them.

He also says that our sense of “free will” is an illusion that is imposed on a complex interplay between our circumstances and our neurological circuits, the workings of which mostly lie outside our conscious awareness. Moreover, seemingly random events that occur in one’s life can change one’s disposition (or belief system) in ways that cannot be accounted for, if one were completely in control of one’s life trajectory.

In Tibet, a well-known story about a bandit and hunter tries to elucidate this. Since in that culture, hunting animals are considered an abhorrent form of violence, the man’s actions were already deemed sinful. One day, when he shot a deer, he was surprised to find that the animal, even as it lay bleeding and dying, was actually giving birth. Moreover, the deer continued to direct its loving attention on the newborn, licking it and tending to it “to her very last breath.” The sight of that creature changed the hunter completely. He not only gave up hunting, he lost interest in his hitherto selfish existence, and turned to intense contemplation, becoming one of the more revered teachers in the nation.

Regardless of whether you are a rationalist/materialist or a believer/contemplative, or an ambivalent agnostic, this book is worth reading, as a model for the kind of debates we ought to encourage in all spheres. Wherein both participants are brilliant, dispassionate and respectful of each other. A feat worthy of recognition, in any context, but especially perhaps, since it’s a parent and child, where the emotional investment in changing the other’s mind often clouds such discussions.