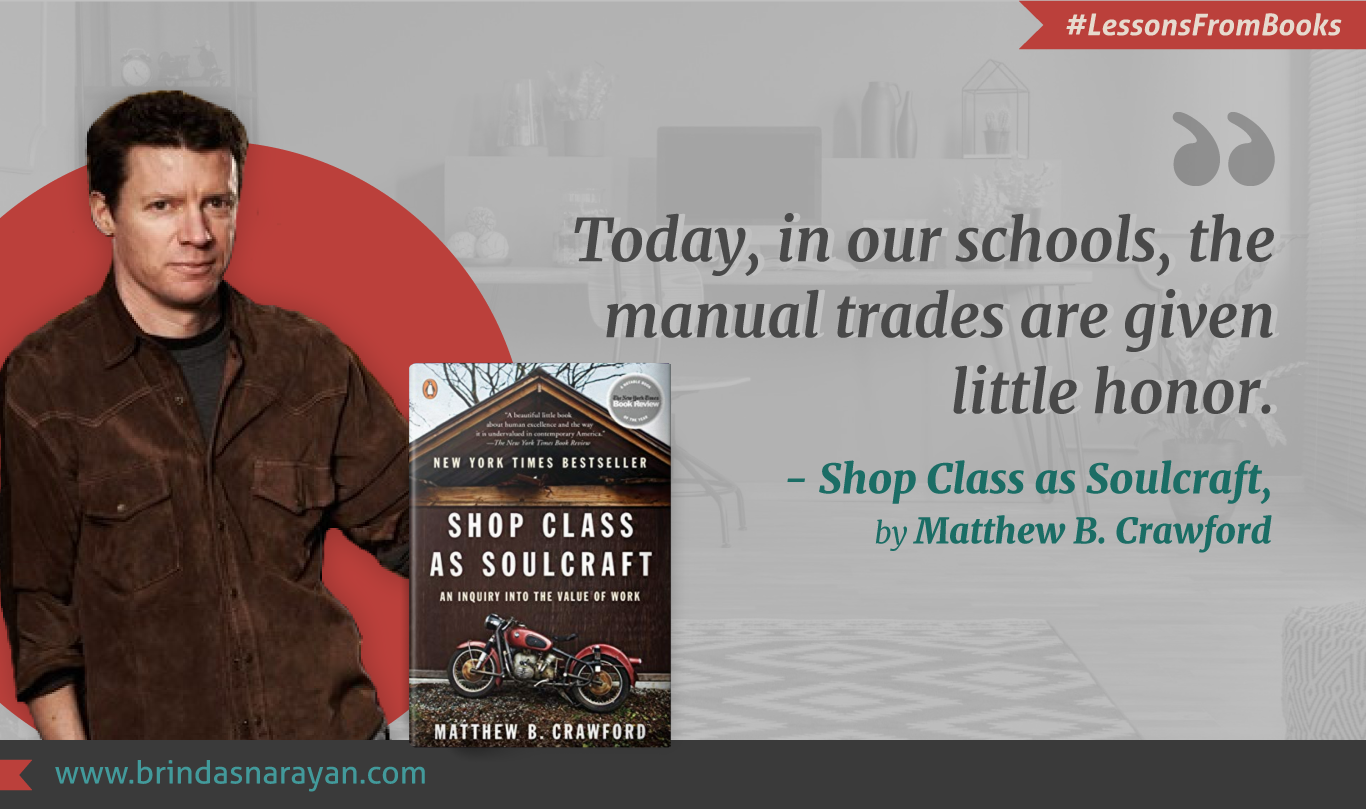 From Intellectual to Manual Work

Matthew Crawford was unafraid to chart a path that would seem “absurd” to the status-climbing, educated class. After garnering a Bachelor’s degree in Physics, and later on, a Doctorate in Political Philosophy from the academically-rigorous University of Chicago, he quit his job as the Director of a Think Tank at Washington D.C. to start a bike repair shop.

While such a career move would be greeted with shock and perplexity in most cultures, I can imagine how such an announcement would garner heightened censure in most Asian societies, where education is typically positioned as a means to lift oneself up socially and economically. Movements in the other direction are rarely voluntary, and would be construed as a personal failure or an act of desperation. But as Crawford, puts it in his deeply contemplative and carefully-examined account of his own experiences, such thinking is the product of many unquestioned and false assumptions. In some senses, Crawford has made the kind of fearless and defiant move that ancient philosophers urged on their followers. To not just impart lessons inside classrooms or stick to publishing academic papers, but to live the kind of unorthodox life that can be a lesson in itself.

Some of the reasons that fueled his choice of manual work, after relinquishing a strategic and intellectual role, might have been seeded in his childhood.  Crawford had been working as an electrician’s assistant since the age of 14, a vocation he persisted in during the summers. After graduating from college with a Bachelor’s degree in Physics from U.C., Davis, he couldn’t get a job. Fortunately for him, he had his hands-on electrician skills as a backup. He set up his own business and given that he was offering the market very pragmatic know-how, he never really suffered from a dearth of work. But beyond the financial buffering, he relished the sense of concrete achievement at the end of each job. Unlike in many obscure managerial roles, if you flip the switch and the lights glow, you know exactly what you have accomplished.

In a more esoteric sense, he also admired the sheer artistry of some wiring work – the complex bending, twisting and connecting of a host of electrical parts, many of which are hidden from human sight in modern buildings. The caliber of his own work, for instance the fastidious fixing of a joint, was going to be hidden from a client’s view. While some other electrician might encounter it in the future, that was almost not the driver for quality. As he says, “craftsmanship has been said to consist simply in the desire to do something well, for its own sake.” So even without any recognition from the client, the imperative to perform as well as he possibly could, imbued his job with the kind of satisfaction that an artist or musician might derive from work.

An Insider Perspective into White-collar Work

But socialized like most of us are, into seeking higher degrees and eventually white-collar or academic work, he started attending night school, while still working as an electrician, to learn Greek. His proclivity for the language had been inspired by a brief encounter with Philosophy during his last year at college. Eventually, he wound his way to the University of Chicago, where he ended up with a Master’s and then a Doctorate in Political Philosophy. The pursuit of his doctoral studies was also interrupted by a stint at a white-collar job, which revealed some of the less appealing aspects of the white-collar world.

His role, which he landed after his Master’s degree, required him to summarize journal articles, from a variety academic disciplines. But with an emphasis on productivity rather than quality, he intuited that many of the summaries would be futile to potential readers. Despite knowing that what he did made no sense, he was compelled to keep doing it, since that was the job’s requirement. Comparing this with earlier stints as an electrician and as a car mechanic, he felt those prior jobs had been based on objective standards, where everything you did counted towards something tangible. He sensed why a certain kind of “self-estrangement” could occur inside such office workers, when the quality of one’s work is often subordinated to the overall imperative to pursue profits. He wonders: “Is this our society as a whole, buying more education only to scale new heights of stupidity?”

After completing his Doctorate, and a one-year stint at a Committee in the University, he joined the D.C.-based Think Tank. The job was prestigious no doubt, and also high-paying. But five months inside the place was all that Crawford could take. For one thing, he was compelled to express opinions he did not believe in, since those were the values espoused by funders. But perhaps, there was also a subconscious tug, to return to physical, tangible work that was based on well-defined standards, and even strangely more gratifying than many of the “pretentious” roles at more “intellectual” settings.

Soon after he started his bike repair shop, “[he] quickly realized that there was more thinking going on in the bike shop, than in [his] previous job at the think tank.” Moreover, he said he felt more psychologically fulfilled in being the proprietor of a bike shop, trading parts and buying tangible materials from machinists and fabricators.

He had moved from safe academic environs into a “brick warehouse” inside a “leaking, uninsurable” building. He was surrounded too by a host of colorful characters: other bike mechanics, a junk dealer, a painter of nudes, a pizza-delivery man who scooted town after getting into some violent escapade. There were no attempts at civility here, no maintaining a façade of politesse. People said what they wanted to say, slinging cuss words without fear of performance appraisals. Magically, Crawford felt at peace with the setting and his new companions: “Going to work didn’t require putting on a costume, literally or psychically.”

There were other payoffs too. When he ate out at particular restaurants, he was treated well by cooks whose bikes he had repaired.

He also started accumulating his own “library” of smells, sounds, and feels. From this encyclopedia of sensory knowledge, he was able to draw out possible causes for certain problems. Even “seeing” what the problem was often entailed more complex maneuvers than many people may assume. Situations could be comprised of so many “variables” that the solution had to be arrived at through “hunches rather than rules.” He wasn’t isolated either. He forged a (telephonic) network of fellow bike repairpersons who shared knowhow on specific antique bikes, for example.

Cognitively, he realized that manual work, was as or even more demanding than some jobs performed at offices, think tanks or in academia. He was curious about why such work, despite its “intrinsic richness” had fallen out of favor across societies.

A Brief History of Craftsmanship and Blue-Collar Work

Even as factories started setting up in the early period of industrialization, craftsmen were drawn out of workshops or homes, where specific skills were acquired, into factories, where much of the “thinking” was removed from the assembly line. Later, with the advent of Taylorism and time-and-motion studies, workers were urged to focus on repetitive physical motions (which would later be handed off to robotic arms), while the organization of the work itself and a coherent appreciation of the whole product was handled only by higher levels.

While this led to a large-scale deskilling of the working class, it also entailed a growing disinterest in work itself. Such disengagement might have partially fostered more absenteeism and a growing lawlessness among blue-collar workers. In turn, managers were asked to devise more automation, and award even less autonomy to increasingly undependable workers.

Later in the twentieth century, there was a revival of Arts and Crafts, to address the growing disenchantment with office jobs. For many who belonged to upper income groups, the crafts were seen as a “mode of pleasure.” Beyond that, there was also an attempt to imbue blue-collar workers with craftsman like ideals – doing a job well for its own sake, acquiring a pointy, visible skill, displaying passion and commitment – which had largely been eroded inside modern factories.

A Ballooning of the Knowledge Economy

With the increasing virtualization and digitalization of every sphere of life, the impetus to enter knowledge jobs has only grown stronger in contemporary times. As recently as the 1990s, American high schools had “shop class” – a hands-on training in metal skills, carpentry, sawing and other machining tasks. But since the 1990s, and with growing pressure to focus on test scores, the shop class has been eliminated from most schools. Crawford quotes Jim Aschwanden, executive director of the California Agricultural Teachers’ Association, who rues this large-scale shutting down of a critical learning component: “We have a generation of students that can answer questions on standardized tests, know factoids, but they can’t do anything.” (Emphasis mine)

In the thrust to push towards egalitarianism, everyone is being thrust towards a knowledge career. But beyond the socially-constructed elevation of knowledge jobs, people are also afraid to master only one specific skill, in case that means that their life would be constrained to follow a narrow path. These are hardly the kind of social attitudes that would enable craftsmanship (which can include learning a trade, or becoming a repairperson): “Craftsmanship entails learning one thing really well, while the ideal of the new economy is to be able to learn new things, celebrating potential rather than achievement.”

Moreover, being a repairperson might be exactly the kind of personality we all need to cultivate. Unlike narcissists who presume a delusional mastery over the world around them, the repairperson is compelled to constantly deal with the broken and the seemingly irreparable: As Crawford puts it: “For this very reason, his work also chastens the easy fantasy of mastery that permeates modern culture.”

In addition, repairpersons are grounded in the solid tangle of wires or pipes that make up our electrical and plumbing systems. According to Richard Sennett in The Culture of the New Capitalism, as a result, the repairperson or craftsperson, by “being able to think materially about material goods,” is less susceptible to the “manipulations of marketing.” Unlike consumers, who live in a constructed world of intangible brands, who choose to discard the old simply because they can, and because they are always tugged by the new.

Besides, the constructed “dichotomy” between manual jobs and knowledge work may also be false and misleading in other ways. Because this assumes that jobs like those of a plumber or electrician require no knowledge. In fact, Crawford who has engaged extensively in manual work attests to its “cognitive richness.”

Eventually without imbuing his path with any lofty notions – like being consciously simpler or Thoreauvian, or voluntarily “working class” – he is merely advocating for “work that is meaningful because it is genuinely useful.” If you want to read about a courageous life, grounded in the kind of philosophical and social outlook that can shake your own perceptions about your next career move or child’s future, do spend time with The Shop Class as Soulcraft.

Crawford, Matthew B., Shop Class as Soulcraft: An Inquiry Into the Value of Work, The Penguin Press, 2009