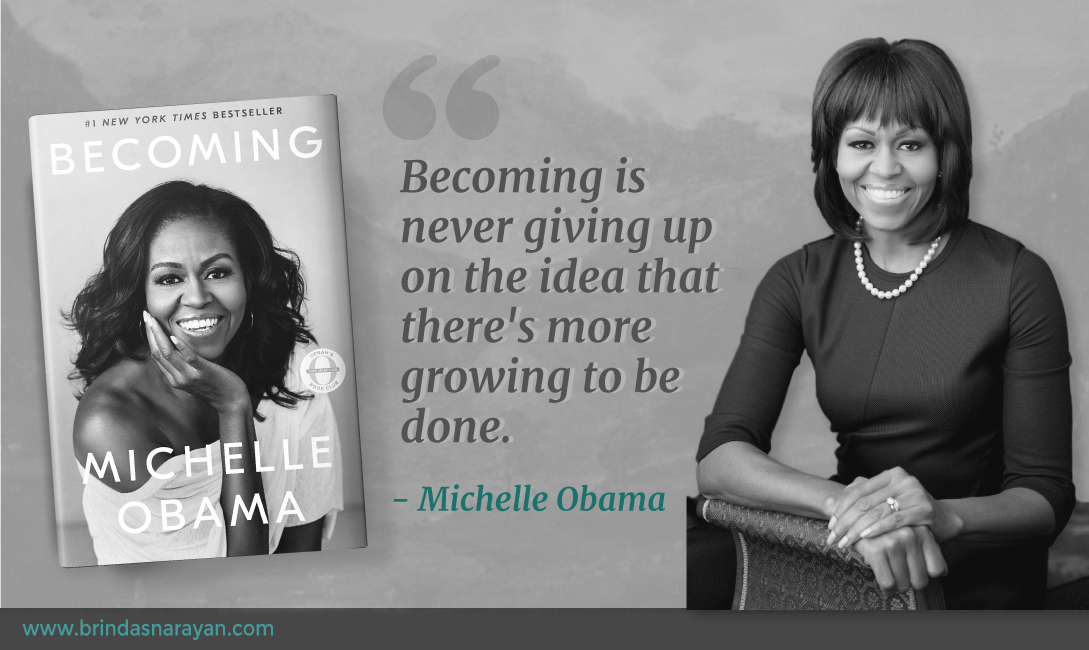 It can be disconcerting to attempt changes at midlife even under the watchful scrutiny of just friends and family. After all, most of us would prefer some semblance of privacy and anonymity while fumbling into new terrains, especially now that we carry the extra heft of being ‘grown up’. Take that ordinary discomfort and magnify it a million times, and we get a sense of what Michelle had to grapple with, in her mid-forties, as she transited into a new role under the hyper-critical gaze of trailing cameras and a global audience.

In her disarmingly honest memoir, Becoming, Michelle lays bare the boons and pitfalls, the magical ascents and stomach-churning tumbles that accompany the world’s most watched political family. Intensely conscious about being a role model for other girls and women around the world, Michelle grounds her account of their extraordinary eight years in the White House with the ordinariness it sprang from, and the ordinariness the Obamas deliberately returned to, when they handed the baton to the next inhabitants. Regardless of the political orientation of readers, both Michelle and Barack will always be remembered for the balletic grace with which they assumed, wielded and then shed power, offering lessons to others who are striving to climb towards or disembark from sundry heights.

View “Growing Up” As An Ongoing Process

Michelle expresses her discomfort with the question that many adults pose to kids: “What do you want to be when you grow up?” Realizing that even now as an ex-First Lady, she’s constantly evolving and growing in new directions, she says the question assumes that “growing up is finite. As if at some point, you become something and that’s the end.”

At one point, however, even Michelle might have been prey to such a finitude of choices. After graduating from Princeton with a degree in sociology, and from Harvard with a law degree, she was determined to make her way up in corporate law, gathering along the way, the means to buy a house and car, and provide for a family. Having been raised in a middle-class family, that couldn’t afford to buy a house, and having watched her parents sacrifice all personal pleasures – no dinners out, no foreign vacations, no beach trips – to support their kids, Michelle was understandably anxious about lifting her own economic station. Besides, she had also watched her parents struggle in other ways. Her father, who worked for the city of Chicago, “tending boilers at a water filtration plant”, was struck early on by Multiple Sclerosis. Despite the escalating pain and a gradually wilting body, he never missed a day at work, even as he shifted from a cane to crutches to a wheelchair. Her mother, for her large part, was a nurturing homemaker, who returned to work as an executive assistant at a bank, when the family needed more funds.

Being raised in the Southside in Chicago, Michelle had watched the economic decline of her neighborhood and the flight of white (and rich) families from their schools. Michelle and her brother Craig were outliers, the first generation in their family to make it to college. Inevitably then, economic goals superseded all else when Michelle made it to a glass-fronted law office that had seemed like an impenetrable universe earlier. Till she was asked to mentor a charming and articulate law student from Harvard, who was interning at her office. His name was Barack Hussain Obama. As Michelle puts it, “Until now, I’d constructed my existence carefully, tucking and folding every loose and disorderly bit of it, as if building some tight and airless piece of origami…He was like a wind that threatened to unsettle everything.”

Though Barack had also grown up in modest material circumstances, he did not seem to share Michelle’s worries about their financial future. He was insistent always that work be meaningful, rather than high-status or materially rewarding. Though he had the kind of personality that the best law firms vied to hire, he deliberately chose not to enter any on graduation. He was drawn to grassroots organizing with low-income communities, and had vague notions about making money with his books. Even at times, when they were both saddled with high student debts, Barack remained optimistic about life working out, prompting Michelle to re-examine her own framework. In a first step away from a sure-shot corporate career to a less certain trajectory, Michelle worked for the City Government. Then for a nonprofit that placed young people in public sector or nonprofit apprenticeships, later at the University of Chicago medical center, trying to foster stronger community relations with families like hers.

Even as they transited into the nation’s most powerful address, Michelle was always aware of how she and Barack were also merely parents, or spouses, or friends, or mentors – to an extent that she deliberately ensured that their other obligations were not submerged or forgotten by their overwhelming public positions. For instance, she wanted her kids to have as normal a childhood as possible, despite security agents trailing them even to football games or ice-cream outings. While Michelle’s accompanying them on such trips would have created a similar ruckus (since the First Lady was not allowed to travel without her security entourage), she fostered a sense of normalcy by insisting that her own mother live with them, inside the White House, at all times. So, the kids, despite being escorted in bullet-proof vehicles, were always accompanied by Mrs. Robinson, their grandmother.

Transiting from an apartment in Chicago to a sprawling mansion, which had “elevators, a bowling alley and an in-house florist,” “a bed that was made up with Italian linens,” and meals dished out by “a team of world-class chefs,” must have felt like a sudden tilt into a fairytale existence. Yet, despite having help with all aspects of their lives, Michelle’s mother, Mrs. Robinson tripped off every day to do her own laundry. She also insisted that she did not need Security agents, and managed to slip in and out of the gates, unobserved. She still shopped at CVS or Filene’s Basement, where she occasionally bumped into people who remarked that she looked a lot like Michelle. She always brushed it away as some kind of accidental likeness. She was also emphatic, right from the beginning, that she did not want media attention and hence deliberately stayed out of the press. She remained, through their eight years, “impervious to all manner of glamour and hype.” Her constant presence ensured that Michelle always had glimmers of her family’s normal past inside the surreal landscape of her new existence.

Besides tending to her own kids, Michelle brought many other children into the White House. She created a mentoring program for a group twenty high-schoolers, who were dealing with adverse circumstances or contending with racial or classist biases. These kids were frequently invited in for informal chats where they discussed everything from body image issues to college applications. She also created a widely publicized garden on the White House grounds and she invited local school kids to plant the seedlings, and then tend over their growth on a regular basis. Whenever foreign dignitaries visited, local school kids were invited to share the pomp and pageantry, and to partake of the special foods cooked. Michelle says, “kids made me feel like myself again. To them, I wasn’t a spectacle. I was just a nice, kinda tall lady.”

Remain Conscious About The Downsides Of Fame

We live in an age where fame is often projected as an ideal state. This is also perpetuated by the near-perfect, mostly happy images projected by celebrities themselves. Keenly observant of herself even as tidal waves of publicity started taking over their family, Michelle points out the downsides of being too widely known. For one thing, you can no longer take decisions that swivel around your own desires, since you are “swept into the swift current of other people’s expectations.” More than anything else, every small aspect of your life is now held up to public scrutiny. Michelle says, it’s “like having your soul x-rayed everyday.” Then there’s the unknown effect on kids. This aspect often choked up Michelle, who watched her daughters travel in bullet-proof vehicles to school: “We’d taken two young girls who hadn’t chosen this life, and without thinking it through, we’d fed them into the maw.” Besides, even as you gather the adulation of large swaths of people, you also garner detractors, or even “haters.” More than anything else, you start cherishing what you once had in abundance. “Now, the big moments are really the small moments that ordinary people take for granted.”

People spend much of their lives trying to acquire power, and then wielding it. What we perhaps pay less attention to is forging an identity that can withstand the voluntary (or involuntary) loss of power. After all, for most people, living in liberal, democratic societies, power is transient. As much as any position and its perks might be enticing, dream rides (along with their nightmarish aspects) do come to an end. As Michelle simply puts it: “Then it was over…One President’s furniture gets carried out while another comes in.” Since she was conscious all along about the highs and lows of being the First Family, Michelle instantly savored the freedom associated with not being a First anyone anymore. For instance, soon after she was alone at her more normal home in D.C., she made herself toast and wedged gooey cheese between slices, slipping onto her backyard lawn to just eat – an act that could not have been performed at the White House without creating a stir among the chefs and servers and the security agents that always followed her every move outdoors.

Later, of course, she morphed into an author, and she and Barack have also teamed up on other creative, social ventures, to elevate the voices and needs of marginalized communities around the world. Instead of dwelling on the loss of power, you can treat the return to a quieter life like a gift. As the Pulitzer-winning poet Mary Oliver says, “Whoever you are, no matter how lonely, / the world offers itself to your imagination, / calls to you like the wild geese, harsh and exciting — / over and over announcing your place / in the family of things.”