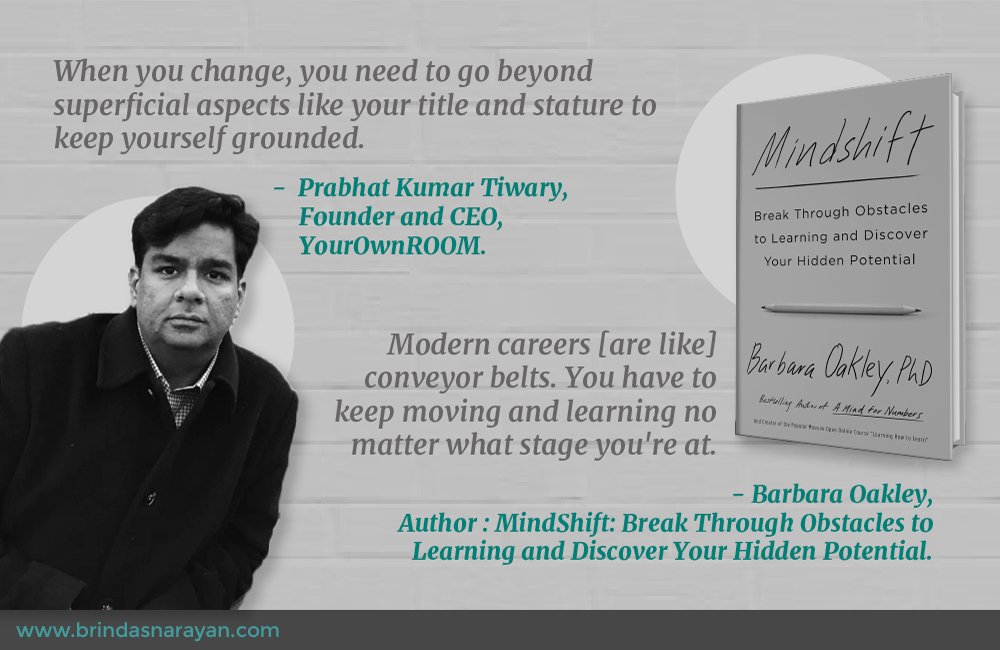 Engineering Midlife Mindshifts: A Conversation With a Founder

It was at Koramangala, that the two Bansal partners started the iconic Flipkart. Since then, known variously as the “Bandra of Bengaluru” or the startup hub, the locality has been reshaped by its chic pubs, swank restaurants and organic food stores that service the entrepreneurial swish set. It’s rather apt then that I met Prabhat Kumar Tiwary, founder of YourOwnROOM, who kindly agreed to share his story with me, inside a warmly-lit café. Amidst the hiss of the steaming espresso machines and murmurs about “B to C” and “seed funds” that wafted above other napkin-doodling dreamers, Prabhat talked about his decision to quit a senior leadership position and create his own venture.

I was specifically seeking someone who had started his or her enterprise “mid-career”, since I’m still fascinated by the extent to which brains, and even lives, are more plastic than originally envisioned by scientists in earlier eras. In her book, Mindshift: Break Through Obstacles to Learning and Discover Your Hidden Potential, author Barbara Oakley believes such late-life transitions tap into latent energies, capacities that mid-lifers might not be cognizant of even in themselves: “Much like wizards who think they’re Muggles, they often remain unaware of their power,” she says. Oakley is particularly invested in this topic as she herself is a “second chancer” who morphed from a career in the Humanities into an Engineering Professor.

Leveraging her connections with a diverse set of learners through her wildly-popular online course titled “Learning How to Learn,” Barbara travelled the world to document the stories of midlife learners who had overcome personal and social challenges to drive themselves in new directions. Most of her examples revolve around people who have shifted from the Arts and Humanities into Technology or the Sciences, a shift that is typically framed as being more daunting to undertake. However, takeaways from the book can be applied for those who transit the other way too – from the hard sciences into the softer, more humanistic fields.

My conversation with Prabhat is perhaps, the beginning of a quest. I hope to confirm if Oakley’s optimistic take on midlife changes can also play out in the Indian context. I am curious, too, about cultural variations in attitudes towards late-stage detours from socially-kosher linear trajectories.

One of Oakley’s interviewees, Graham Keir, shatters a stereotype about midlife transitions. Mid-lifers who were tugged into mainstream careers by family pressures or social expectations often assume that people who chose to become artists or musicians are living the more passionate (or authentic) life. Graham, who grew up outside Philadelphia, seemed to possess all the ingredients for a successful musical career. For one thing, he had started playing the violin at four, the guitar at eight. When he reached high school, Oakley reports, “the smokey world of jazz beckoned.” Philadelphia, having birthed jazz legends like John Coltrane and Dizzy Gillespie, seemed like just the place. He even ended up training at top notch conservatories like the Eastman School of Music and the Julliard School.

An unexpected event triggered a change in Graham. He was invited to play the guitar at a pediatric cancer center. He repeatedly visited the center, to meet with kids whose lives teetered between hope and despair. He was surprised by a new yearning that these visits seeded. He wanted to be a doctor, not a full-time musician. Unfortunately for Graham, Math and Science at high school had been his bêtes noires. Yet, as an adult learner, Graham was more willing to ask for help than he had been at high school: “I met with professors and asked questions in class…I had to put my pride aside. The goal was to do well on the test, not look like a genius all the time.”

Learning at Midlife Requires a Willingness to Be Humbled, Often By or Among Younger People

Even for Graham, asking Professors questions might have been the less awkward bit. More bruising to one’s sense of self, especially after one has achieved proficiency or mastery in a field, is the humbling (or even humiliating) notion that younger people will overtake you in the new field’s learning environment. Dredging up the same grit he had used to master music, Graham brushed up on his basic math skills with a precalculus e-book. However, when he finally registered for a Calculus course at Columbia, he “felt like he was in a go-kart competing against seasoned race car drivers.” His classmates, many years younger, glided across Math tangles that Graham painstakingly wrestled with. The willingness to start over with what the Zen Masters would call a “Beginner’s Mind” is perhaps the most significant (and least regarded) aspect of adult learning.

When he was 32 and already at a senior position at HP, Prabhat decided to pursue an MBA to grant himself new insights. He acknowledges that at that point, with a wife and son at home, it wasn’t as easy to buckle down and study for the GMAT. Besides, he hadn’t done exams for a while. At first, he needed to shift his context – move to Mysore, where his brother-in-law resided – to give himself a break from household distractions. Math and Science had always been his strong points at school and college. But even in Math, he needed to brush up his concepts, since he noticed some decline since college. It took him longer to focus on the arduous GMAT passages. But he stuck with it, taking time on Friday evenings and on weekends, to master the material. Eventually, he was admitted to many top MBA programs, including Stanford, where he headed.

Later at 41, when he relinquished his Senior VP position at Xchanging to start his own enterprise, he needed to reskill himself in tasks that were earlier relegated to subordinates. He says that one has to realize that being a CEO or a Senior Leader is only a “role one is playing,” a hat that one has to willingly doff to acquire the agility required of an entrepreneur. At his new outfit, Prabhat has to play various roles, sliding up and down the ladder – from being a CEO to a program manager and to anything else below or above – with emotional and psychological nimbleness.

Graham’s musician experience bolstered his doctor abilities in surprising ways. For instance, in auscultation, which involves diagnosis by listening to heart sounds, Graham’s musical ear was more adept to picking up “differences in timbre and timing.” Having worked in large ensembles for concerts, he was also practiced in listening carefully to other people, before interjecting with his own thoughts. This made him more empathetic with patients, a critical doctor skill as it turned out. Moreover, his experience with musical “improvisations” trained him to respond faster during medical crises or unexpected turns in patient conditions.

Unrelated experiences in a previous domain can also lead to creative breakthroughs in the new one. In the oft-cited book, The Structure of Scientific Revolutions, the science historian Thomas Kuhn observes that innovations in a field are often ushered in by two groups of people. The first group consists of younger novices who are not yet habituated to thinking in ossified ways. The second group consists of mid-lifers who have transited from a previous career into a fresh one. As Oakley says, “you may feel like you have a childlike incompetence when you are switching disciplines.” But it maybe the very lack of mastery that can lead to breakthrough thinking.

Another Oakley interviewee, Stephen Hicks, a Professor of Philosophy at Rockford University in Illinois, closely tracked the career of the astrophysicist Subrahmanyan Chandrasekhar. Hicks observed that Chandrasekhar’s strategy was to “read and think intensively several years in one area of physics and then write several papers and one overarching book to integrate the ideas. Then he would shift to another, often quite different, area in physics and do the same thing. Over the decades he avoided rut thinking and was able to make creative contributions to many areas.”

Hicks decided to mimic Chandrasekhar’s approach in his own career. He organized his life into six-year units, choosing to dwell on distinct areas of philosophy during each six-year fragment. Such ongoing creative detours also helped Hicks forge connections between seemingly disparate topics.

Like Hicks and Chandrasekhar, Prabhat, as a Senior VP, knew that he needed to infuse freshness into his life. He remembered that, when on a stint abroad, he had dabbled with building an online real-estate portal. He had worked on it along with his full-time job, but he didn’t have the courage, at that stage, to quit his job and focus entirely on the portal. Eventually, when he returned to India, he abandoned the project.

But even later, he could not forget the elation when working on his own, and in something to do with real-estate. He had always been more prescient than his friends in predicting real-estate trends and in spotting unforeseen wins in real-estate investments. During a conference at Kuala Lumpur, when he had some time for solitary reflection, he realized that his current job checked all the boxes – status, money, career prospects, stability – but he wasn’t feeling thrilled about the future. He felt like he needed to recover the buzz he had experienced in his twenties. He was also certain about wanting to address a ‘simple’ issue – like “roti, kapda or makaan” (food, clothing or shelter). Given his flair for real-estate, he embarked on a business that addressed a critical gap in the urban rental market: a tech-enabled solution that connects millennial tenants with properties close to their workplace, shrinking gridlocked commutes on glutted roads. Despite the risks associated with a startup, Prabhat does not regret plunging into a more adventurous terrain.