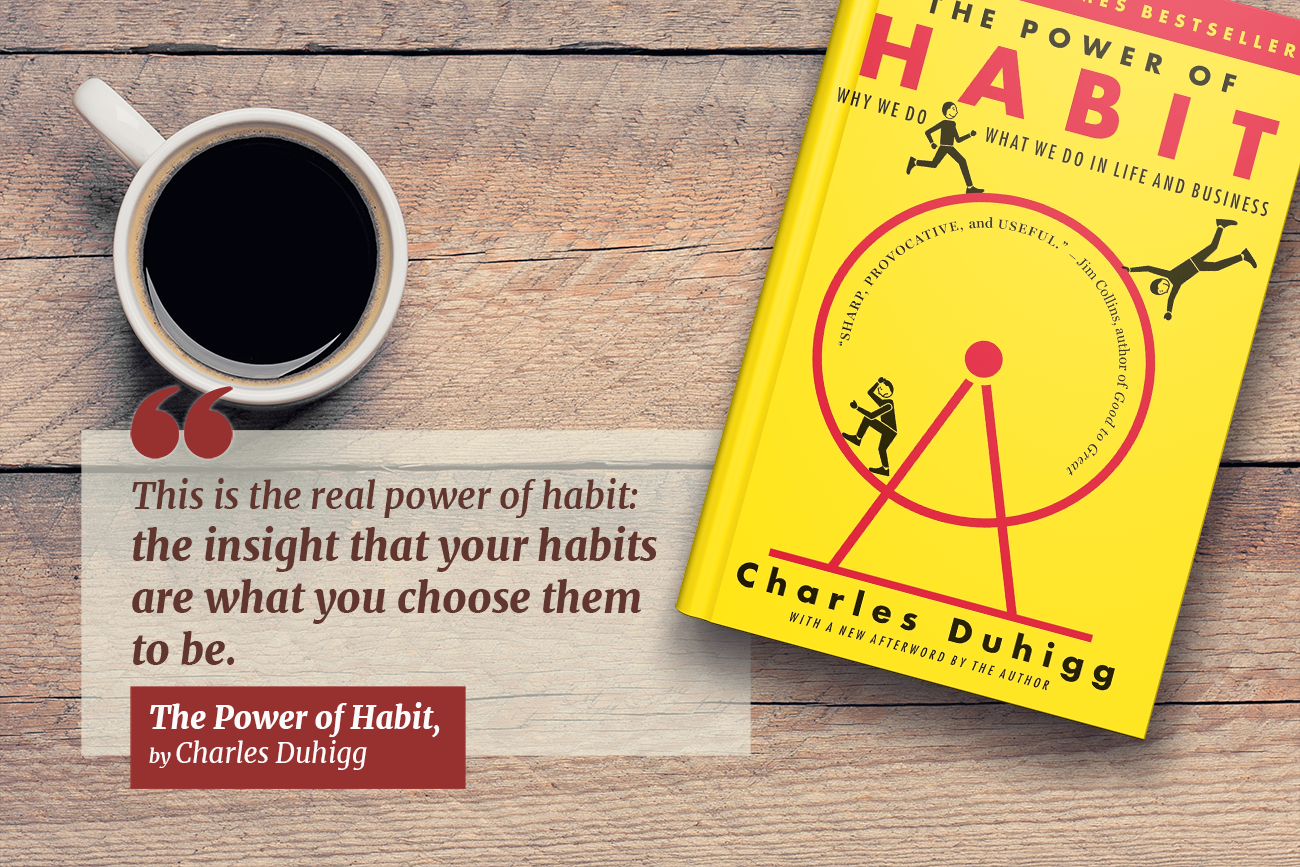 Lessons from Books: Leveraging the Science of Habits to Drive Personal Changes

Usually the New Year compels resolutions. But 2021 might spark an urge to dismiss such rituals. And to break free from the persistent thrum of uncertainty that reverberates across banal decisions – Eat out today? Get a haircut? Invite guests? Even as vaccines are trundled across and between nations, it might be worthwhile to greet the New Year with the normalcy of any other year – when some of us still made hazy promises to the self, to change this or that aspect of our everyday lives. While we hope that larger social and medical forces contain the caprices of the virus, we might want to break down the blur of locked-in everydays into hourly or even minute-by-minute tasks. And perhaps examine how we can unfetter ourselves from the insidious creep of certain habits, even as we cultivate new ones.

Despite a slew of recent books that dig into the neurological origins of our daily routines, the human obsession with “habits” has long preceded new age brain scans. After all, while clarifying Aristotle’s message, the writer and historian Will Durant, in The Story of Philosophy, published as far back as 1926, said: “We are what we repeatedly do. Excellence, then, is not an act, but a habit.”

Charles Duhigg, the author of the 2012 The Power of Habit was a New York Times reporter who stumbled into the science of habits almost by accident. While covering the war in Iraq, he observed an army Major’s remarkable success in preventing riots in Kufa, a city that lay ninety miles south of Baghdad. Even as insurgencies were spiking in the region, the Major had orchestrated a simple change in his terrain. As soon as people started gathering near a monument or plaza, the Major had requested the local officials to move food vendors out. Since riots usually broke out after crowds had simmered around a particular place for a few hours, the dispersal of food vendors sent the less-involved spectators home. Watching some people leave the site propelled others to follow suit, till most had dissipated.

The Major then disclosed to a curious Duhigg that he had always been watchful of “habits” – of his own personal ones, of others in the army as well as of crowds he had been commanded to steer. His insights had given him the tools to discipline himself as well as teams or situations he needed to manage. When Duhigg returned to the United States, he embarked on a personal study of habits, interviewing and reading papers by neurologists, psychologists, cognitive experts and other scientists who had stumbled on recent advances in the field.

While summarizing his key findings, Duhigg convinces us that all our habits are malleable, at any age, and even in the midst of seemingly-impossible circumstances. For instance, the first subject that he describes was a woman called Lisa, whose life felt almost irrevocably wretched. She was smoking too much, drinking too much, eating too much, and moreover, her husband had recently walked out on her. Contending with a divorce, a feeling of bloatedness and futility, she embarked on a what-felt like a “rash” vacation to Egypt. While the pyramids hardly elevated her mood, one morning during a taxi-ride through a desert – through miles and miles of indifferent sands – she resolved to make herself fit enough to trek through that arid landscape, a year from that date. She didn’t know then if such treks were possible, or what steps she needed to take to gear up for such a physical adventure.

None of that seemed to matter. Once she had determined her “goal,” she returned home with a relatively-stronger purpose. Of course, she couldn’t change everything at once. So, she focused on smoking. Duhigg suggests that picking such a “keystone habit” is essential to effecting habit changes. After all, almost no one can change everything at once. A year later, a toned Lisa, who had substituted smoking with jogging, returned to fulfil her promise. Moreover, her fitness rippled into other aspects of her life. Even as she started on half-marathons, she returned to school to re-educate herself, met a new man and eventually bought a house.

While such “Cinderella-like” transformations can feel out of reach for many of us, perhaps we can strive for smaller improvements that might eventually add up. After all, according to a 2006 Duke University study, at least 40% of our daily doings are controlled by “habits” – rather than by explicitly conscious choices. How then do we change routines that feel like they are controlled by an “automated”, unconscious part of us?

Some of the answers have emerged from the Brain and Cognitive Sciences group at the Massachusetts Institute of Technology (MIT). One of the experiments involved placing rats – with sensors already embedded in their brains – inside a T-shaped maze, with a chocolate dangled at one end. At first, the untrained rats seemed to make random or directionless movements – scratching surfaces, sniffing here and there. However, even as their physical activity felt purposeless, their brains were completely lit up. They were absorbing all the new information – the smell of the chocolate, the geography of the maze, the textures of their terrain – while figuring out how to navigate it. Over time, the rats learned exactly how to get to the chocolate, even as the activity on their brains seemed to shrink. As Duhigg puts it, “As the route became more and more automatic, each rat started thinking less and less.”

The directions had been stored inside a tiny clot of cells called the basal ganglia, which is, as scientists have now confirmed, the brain part where habits are stored.

Why does this matter? It’s an indication of how “chunking” takes place. In order to conserve energy, the brain chunks routine activities, so that we are no longer conscious of the minutiae of everything we do. For instance, “driving to work,” might have, at one point, involved mastering a complex set of instructions, especially if you were in a new country, and had never driven on that the side of the road. But having done it over and over again, you no longer notice the landscape or the millions of trivial decisions your brain makes during the commute. While such compressions facilitate our efficient functioning inside the complex tugs of modernity, the cognitive shortcuts also unfortunately, feed unhealthy habits and addictions.

Prizing habits apart further, Charles elucidates that they consist of a “cue or trigger”, a “routine” and then a “reward.” For the rats in the maze, the smell of chocolate is the cue. The run through the maze is the routine. Eating the chocolate is the reward.

For an alcoholic, a stressful workday might be the “cue.” His (or her) drive to a bar, where he then pours out his woes to fellow-drinkers over many glasses of Vodka is the routine. The relieved or numb sensation at the end of that drinking session is the “reward.” Alcoholics Anonymous largely succeeded because they tapped into the right cue. They sensed that addicted drinkers needed a place, where they could get things off their chest, and experience relief at the end of that session. The famed 12-steps are almost secondary. The AA program had merely substituted the “bar routine” with another cathartic meeting. In general, one of the takeaways is that “substitution” works better than suppression.

The book can also be mined by startups and marketers who want to ascertain how “cues” and “rewards” can be designed into products and communications campaigns. Companies like Proctor & Gamble already use such findings to propagate minty toothpastes and odour-absorbing fresheners. Beyond consumerist ends, Charles also suggests that the Civil Rights Movement and other protests against racial or social inequities were fuelled by social “habits”. Though the last section might feel like the author is force-fitting complex historic and social forces into a psychological framework, the book is worth reading to kickstart smaller or bigger changes in our lives.

As the masterly poet, Zoe Hitzig phrases it in her debut collection, “Find moments like tiny razors. / Arrange into blades. Harvest them / as a leisure gardener […] impose structure. / Inspect roots.”

Duhigg, Charles, The Power of Habit: Why we do what we do and how to change, William Heinemann, Random House, London, 2012.