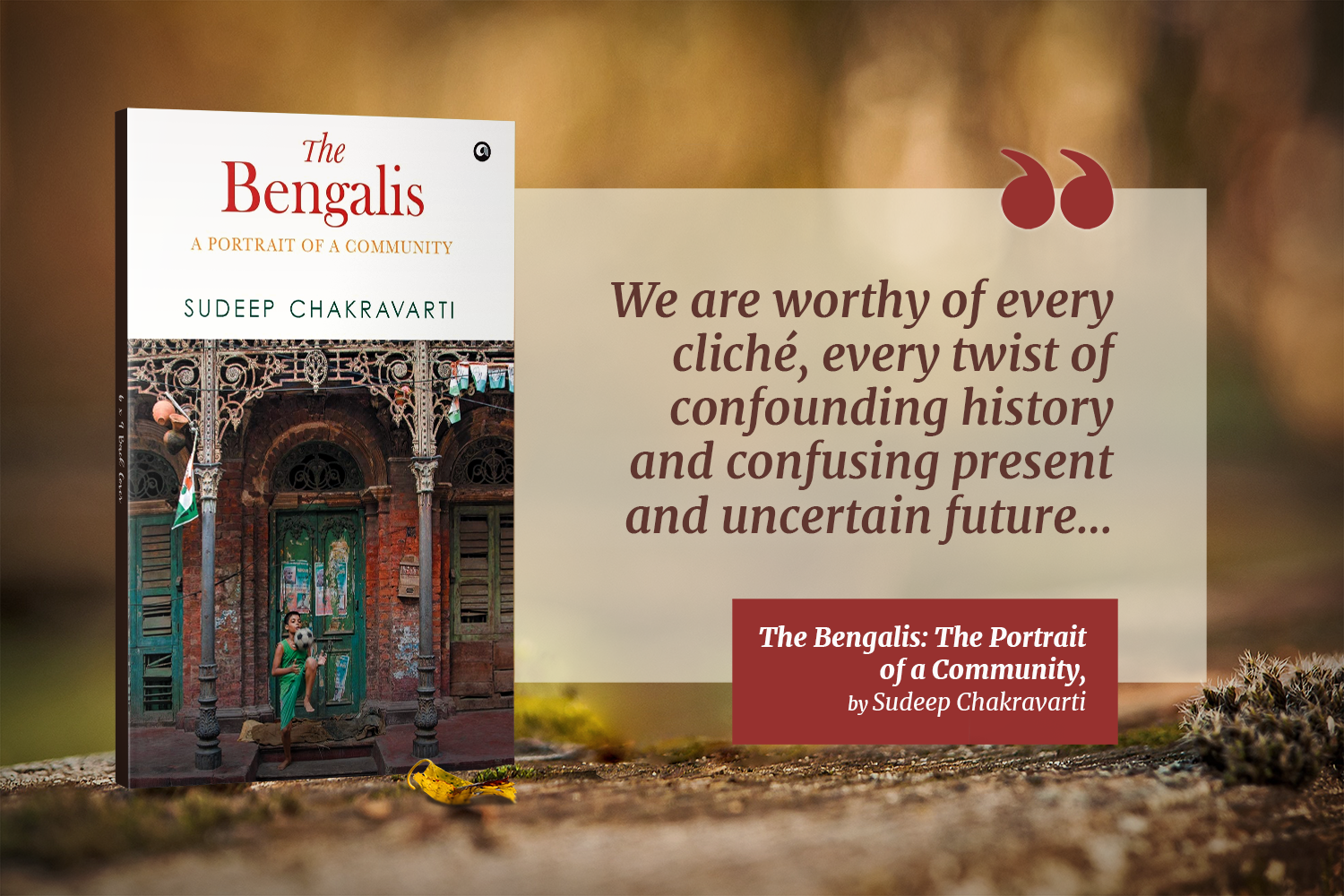 Lessons from Books: A Fascinating Dive into the Makeup of The Bengalis

If one could choose the community to which one could belong, by birth, then I’d have chosen to be a Bengali. It’s not the language – which I don’t understand or speak – that fascinates me as much as a certain aura that surrounds the people, who stem from that marshy, deltaic region. What imbues them with such a mystique? No doubt, the Creative Greats from that area – starting with Rabindranath Tagore, who had with his poems, essays, stories and novels galvanized future generations to overcome an interiorized sense of subordination.

Tagore himself was the culmination of a tumultuously creative period in the region – the Bengal Renaissance – led by visionary reformers like Raja Ram Mohan Roy who upended social and cultural norms. Since then, the “Banglas” have continued to spawn a staggering array of Creatives whose contributions have rippled across domains. To name only a few, the economist Amartya Sen, the physicist Jagadish Chandra Bose, the musician Pandit Ravi Shankar, the filmmakers Satyajit Ray, Mrinal Sen and Ritwik Ghatak, the writers Amitav Ghosh and Jhumpa Lahiri. There was, more recently, an amusing tug-of-war played out on social media, when Abhijit Banerjee, the MIT economist and co-author of Poor Economics, was awarded a Nobel. While the Bengalis preened about adding another “Great” to their never-ending litany of Prize-Winners, others gleefully gloated that Banerjee’s mother was Marathi.

So, I was delighted to encounter The Bengalis by Sudeep Chakravarti, to get a grip on why one particular pocket of the country seemed to breed so much ingenuity. Chakravarti, being Bengali himself, certainly has the artistry, insight and a necessary insider’s chutzpah to recount the progression of characters and events that have shaped the community. For one thing, I hadn’t realized how “multicultural” the origins truly are. At first the region was ruled by the Buddhist Pals, after which the Hindu Sens took charge. And this too, was an unknown to me: the Sens were originally chieftains in Karnataka. In 1201, Muhammad Khilji ushered a long-lasting Islamic reign, which ended only with the Battle of Plassey in 1757. As Chakravarti notes, the place had a remarkable syncretism stitched into its history.

And then there’s the riverine geography. In language as evocative as the natural world that makes up the region, Chakravarti writes: “To visit the tide country, let alone live there, is to become a changed person. The scale of the rivers, the often-immeasurable horizon, the otherworldly life of water and jungle touched by natural elements of sun and dark and mist and rain and storm cloud and raging storm, take a day and transform it into an event.”

The author also draws attention to how deeply emotive the language issue is to Banglas. After all, Bangladesh seceded from Pakistan because Jinnah made a grave miscalculation. On 21st March 1948, at a meeting in Dhaka, he proclaimed that Urdu would be the only National language of the new country. Maybe he didn’t know this then, but the seeds for a separate Bangla country had already been sown by that single statement. Millions were to lose their life in fighting for their linguistic rights. A large-scale bloodletting that reinforced how intrinsic the language was to Bangla identity, of how a kinship of sounds overrode religious ties.

Other fascinating chapters dwell on Gandhi’s relationship to Bengal. Though the Nation’s Founder did not know Bengali, apparently during the anguished time he spent in Noakhali, in 1946, when violent massacres were erupting across the region – he actually took lessons in Bangla. As Chakravarti astutely notes, this was of course, part of the Mahatma’s ongoing showmanship. After all, the Leader was always conscious of the theatrics of everything he did. By attempting to learn the language, he was emphasizing the commonalities between Hindus and Muslims, “[at] a time when such linguistic and cultural links were being resoundingly, irrevocably broken.” Chakravarti also dwells on the Bengali ambivalence towards Gandhi. After all the Leader had earlier betrayed their sentiments when opposing Subhas Bose’ legitimate election to the Presidency of the Congress Party.

The book also dwells on literary figures, who are already well-known among the Bengalis, but perhaps less so among other audiences. For instance, the writer Bibhutibhushan Bandopadhyay, whose stories inspired Satyajit Ray’s Pather Panchali and the other iconic Apu movies that comprised the widely-recognized trilogy. Or Shankar, the pen-name of Mani Shankar Mukherjee, who, while working at an ordinary office job, authored “gritty books on the urban condition.”

One more aspect that does not escape the reader is, that like Leonardo da Vinci, the iconic Italian polymath, many of the Bengali creators have been immensely learned in multiple domains. Ray was not just a filmmaker but also a writer, a music composer and illustrator. Jagadish Chandra Bose wrote science fiction and had extensive knowledge of the other Sciences, not just Physics. Among contemporaries, Amartya Sen forays beyond Economics and Philosophy – in which he holds formal degrees – into History, Literature and Mathematics. Amitav Ghosh is as steeped History, Ecology and Anthropology as he is in Literature.

Chakravarti also acutely observes the other side, the conceit of the “bhodrolok” (as the erudite, cultivated, polished Bengalis are called) and the categorization of others as the “chhotolok.” Such ascription of status based on a certain kind of upbringing, cultural standing, erudition is possibly embedded into the pernicious Indian caste system elsewhere too, but the binary is perhaps more marked among the Bengalis, especially given the early infiltration of the Bengali bhodrolok into babudom positions under the British. After all this was the community that generated vast numbers of doctors, lawyers, teachers, civil servants and so on, benefiting from the relocation of British India’s capital from Madras to Calcutta in the late 1700s.

Besides internal divisions, the Bengalis, Chakravarti notes, have a particular disdain for the Obangali, the non-Bengali, even creating a word to lump them together as perhaps a sorry, dismissable lot. Of course, the sense of a “Bengali Raj” as he terms it, might certainly be waning among later generations. Regardless of whether you are fortunate enough to be a “Bengali” or are doomed to remain an Obangali, I strongly recommend this book to anyone with an interest in one of the nation’s most fertile, prolific and generative regions.

Chakravarti, Sudeep, The Bengalis: A Portrait of a Community, Aleph, New Delhi, 2017