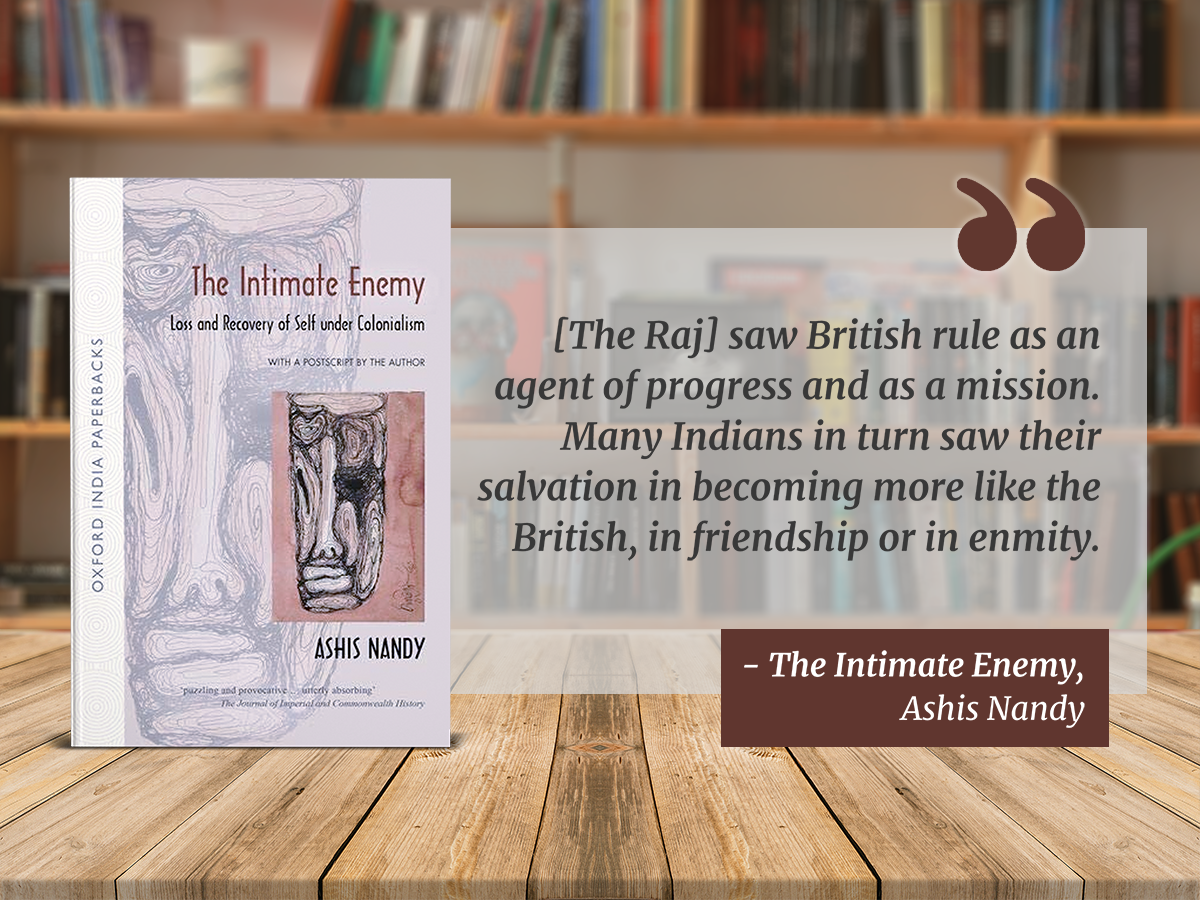 Dwelling in Books: The Intimate Enemy: Loss and Recovery of Self Under Colonialism

Like most readers, I feel like only a part of me lives in the real world. An equal or sometimes larger, almost disembodied self dwells inside pages – some pored over in years past, some recently encountered, some vividly recalled, many others awkwardly forgotten or misremembered. Since then the self has morphed. I thought that it might be fascinating to bump into some of the earlier voices, some calling out from the intimacy of my home library, others captured in journals, or hidden in the recesses of my midlife brain. These posts are short, meant to introduce you to books – both fiction and non-fiction – that I strongly recommend. Some are profound, others unabashedly and even enchantingly shallow, some plod, others sprint, but each has that ineffable “something” we find in charismatic people. A mysterious, magnetic appeal that draws you into their field, not just once, but again and again.

The Intimate Enemy: Loss and Recovery of Self Under Colonialism

In no particular order, the first post dwells on The Intimate Enemy, by Ashis Nandy. While this might be considered an academic book by some, I’m sure Nandy himself would want his message to resonate with larger audiences. This was a book that I accidentally discovered inside a college library. It hadn’t been prescribed by any professor and it wasn’t relevant to my ongoing courses. Yet when I started reading it, I couldn’t tug myself away from its startling, shocking revelations about a subject that I thought I knew too well, but clearly didn’t: myself.

Besides the physical annexation of territories that accompanied colonization, Nandy detailed the more insidious forms of domination, that involve control over social, cultural and psychological aspects of people. In particular, I recalled the manner in which Indians internalized the British critiques of masculinity, with “effeminate” men adopting hyper-masculine mannerisms to mimic the starker gender differences of the colonizer. Or the way in which “children” and “childhood” were recent Enlightenment constructs, and how the very disciplining and shaping of children had colonial overtones.

Moreover, I was imbued with a heightened self-consciousness about not having paid more attention to Indian languages, about reading and writing in English. I could perceive how notions of identity had been fashioned by succumbing to or unquestioningly opposing social strictures from the culture that had spawned me. I sensed how contemporary Indians are both shaped (and distorted) by our relationship with history. It was also the first book that outlined why Gandhi’s methods were truly inventive; of how the leader’s resistance embodied a psychological challenge to British narratives, without becoming uncritically adulatory of Indian traditions.

Nandy, Ashis, The Intimate Enemy: Loss and Recovery of Self Under Colonialism, Oxford University Press, 2009.