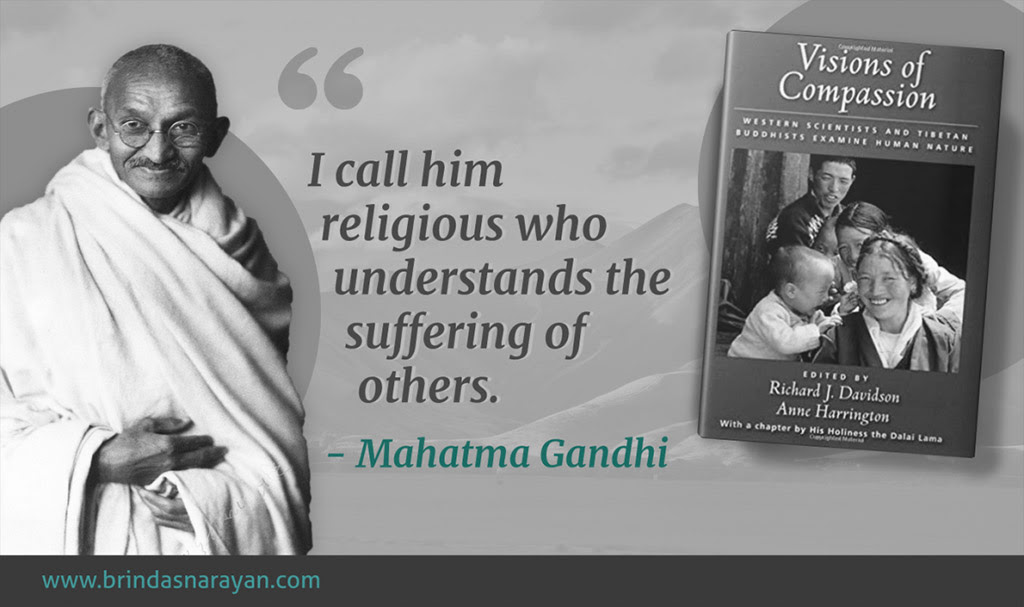 On a recent morning walk with a friend, we were talking about how society obsesses with “success” and the necessary “competitiveness” one should cultivate to achieve it. On the other hand, “compassion,” a quality that, as studies show, contributes more to inner wellbeing than any external status marker, is rarely targeted. On Gandhi’s birthday, perhaps we should turn our lens towards an attribute that the leader tried to consciously expand inside himself and in his followers.

The Mahatma’s focus on compassion can be inferred from various aspects of his life. For instance, in his simple peasant’s attire. Well before “performance art” had established itself among artsy circles, Gandhi was intuitively aware that “life” was a spectacle of sorts, and especially an iconic life like his, that was watched by a multitude of admirers and detractors. His shunning of both British and upper-class Indian clothing was perhaps one of the more potent symbols of his striving to inhabit the “other”.

In his blog titled “Lal Salaam,” the historian Vinay Lal says that one of Gandhi’s favorite bhajans, “Vaishnava Jan To” was chanted through the 250-mile Dandi March, the strenuous trek that started out at the Sabarmati Ashram and culminated in coastal Surat. The English translation of the first verse emphasizes that one is a “Vaishnav” only by understanding the “pain of others” and by helping “others” without cultivating conceit about one’s service.

Though Vaishnavs (devotees of Vishnu) were a Hindu sect, Lal points out that Gandhi himself occupied a discomfiting middle-ground in his attitude towards religion. Though he often used religious and mythological symbols in his public communication materials, and was quite explicit about his own spiritual strivings, “[he] almost never visited temples.”

On the other hand, he strove hard to open up temples to Dalits, cognizant that Indians had to focus as much on self-reform as on attempts to wrest self-rule from the British. Ironically, as Professor Lal notes, while Jinnah, the founder of Pakistan, viewed Gandhi as a staunch or even rabid Hindu, Nathuram Godse assassinated him for not being sufficiently Hindu.

Gandhi’s flouting of dogmatic traditions was mirrored in the life of the Gujarati poet-saint, Narasinha Mehta, who composed Vaishnava Jan To. Born in the early 15th Century to an upper-caste family, Mehta was indifferent to the bookish pretensions of his circle. Often deliberately shattering casteist norms, he would sleep in the homes of “untouchables”, sing inside their abodes and move freely among them. As a result, he was ostracized by members of his own caste:

“They say I am impure, and they are right/

I love only those who love Hari [Krishna]/

I see no difference between one Harijana and another.

Professor Lal suggests that Gandhi imbibed many personal qualities from the Vaishnav saint’s words, including modesty, a renunciation of material desires and compassion.

From The Visions of Compassion: Turning an Academic Lens on Compassion

Compassion maybe even harder to cultivate in contemporary times. Hence it might help to turn to “domain experts,” to people who have studied the attribute with an academic and neuroscientific thrust. In a series of cross-cultural research projects termed “Mind and Life,” scientists from renowned universities like Wisconsin-Madison, Stanford, Harvard, MIT, Emory and NIAS (in India) have, over the years, collaborated with the Dalai Lama, the French writer and Buddhist monk, Mathieu Ricard, and other advanced Tibetan meditators to comprehend practices that can promote attention, regulate emotional responses to life’s stressors and bolster compassion.

As recent outgrowths of this research, Stanford has created The Center for Compassion and Altruism Research and Education while MIT has established The Dalai Lama Center for Ethics and Transformative Values.

The book, “Visions of Compassion,” was the outcome of a Mind and Life conference held in October 1995, in Dharamshala, India. The participants comprised of the Dalai Lama, a few Tibetan monks and a slew of Western scholars and academics including the neuroscientist Richard Davidson and the science historian, Anne Harrington.

The collaboration between the West and the East was inspired by a recognition among Western neuro and behavioral scientists that other knowledge systems and cultural practices might possess a different or even expanded understanding of the human mind. Traditionally, the West had primarily focused on pathologies of the mind (psychiatric conditions, disorders and deficits) or on “performance” enhancing techniques (having to do with improving memory, intelligence and other cognitive functions). “In contrast,” as the editors note in the book’s Preface, “Tibetan Buddhism has long celebrated the human potential for compassion…and sees compassion as a key to enduring happiness.”

Before Western scientists discovered neuroplasticity or the brain’s capacity to train itself into higher levels of attention or performance, Tibetan (and other Eastern) practitioners had always worked on the brain as a “trainable” organ. Some of these experts, achieved as a result, astonishing changes that were “beyond the normal range” as confirmed by subsequent scans inside Western labs.

Such findings have gained greater currency since earlier measures like “IQ” have proven to be inadequate predictors of workplace (or relationship) success. Historically, the enhancement of attention has always had a perceivable market value – after all, high performance in both physical and mental realms has always required Olympian levels of focus. But emotional control was often given the short shrift, till 1995, when Daniel Goleman popularized “EQ” in his chart-busting book, Emotional Intelligence.

Focus on emotional management had always occupied a significant place in Eastern mind-control practices. While charting out pathways to enhancing our emotional intelligence, the Dalai Lama suggests that human beings are essentially “compassionate” at their core. In his essay in the volume, titled “Understanding our Fundamental Nature,” he suggests that ethics can be framed by evaluating the deviance of a law or system from compassion. For instance, if people were to compare totalitarian systems with democratic ones, where the marginalized are also accorded a voice, the system that encompasses compassionate ideals would be accorded a higher ethical rank.

The Dalai Lama also posits that since all human beings aspire to happiness, and since happiness is very closely linked to love, we essentially seek “loving” relationships with others and the world. He cites research that shows baby brains develop more healthily in the early weeks soon after birth, when they are in physical contact with the “mother” or a “mother-surrogate”. Such need for human warmth and affection is possibly a factor that affects growth right through life.

In a study, cited in the book, a set of cancer patients were assigned to two groups. The first group met after hospital visits and shared notes on how they were each faring. They also ended up providing advice to each other and solace during difficult times. In the second group, they just continued with the hospital treatment. After a 10-year period, the first group displayed twice the life expectancy of the second group.

Despite such theoretical knowledge, compassion is often harder to practice. After all, payoffs may not be immediately observable. Moreover, as the Tibetan Leader points out, compassion often operates by acts of omission rather than commission – for instance, you do not shout at a subordinate who has made an error, you do not censure a kid for her failing grade. Such absences are subtler and hence less noticeable.

Gandhi, too, had to fend off the objections of people who wanted faster or more visible outcomes. Even as as he wrangled with British leaders, he stood his ground among party members and other nationalists to retain a higher moral purpose. In advocating satyagraha and non-violence, he tried to foster the sense that both the oppressed and the oppressors are “victims” of an oppressive system. As much as he empathized with the plight of fellow-Indians, he stayed cognizant of the humanity or basic goodness of the country’s British rulers.

Similarly, in the October 1995 conference, one of the discussions on compassion dwelt on the recognition that “the perpetrator is also a victim of his or her own delusions.” Echoing Gandhi’s oft-cited “Be the change you want to see in the world,” Tsewa, according to Tibetan traditions, “is a state of mind or way of being where you extend how you relate to yourself toward others as well.”