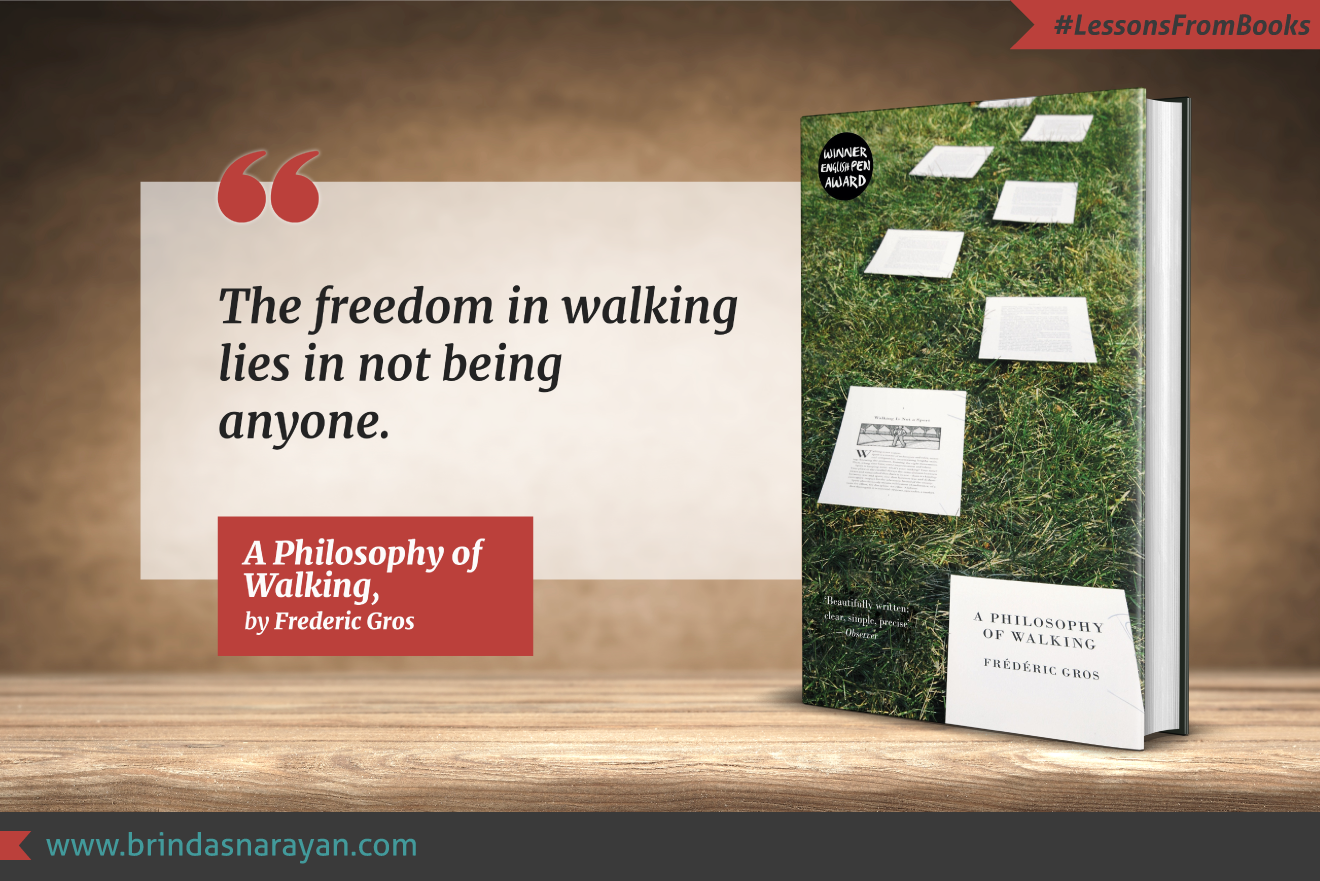 Lessons from Books: Walking with a Philosopher’s Outlook

During the pandemic, many of us have been compelled to alter our exercise routines. Earlier, I used to swim and walk. In the last few months, I’ve been forced, like many others, to just walk. And occasionally, when I walk alone, I’ve been wondering about what walking does to us. In his book, A Philosophy of Walking, the author Frederic Gros, a Philosophy Professor at the University of Paris XII, emphasizes that one of the charms of walking is that it is not a “sport”.

After all, sports usher aspects of war – the framing of the opposite team as an “enemy”, the euphoria of the winner and the dejection of the loser. And then there are other contemporary attributes associated with competitive sports – the theatrics of the televised game, the consumerization of every aspect of it. Even the players are commodified, morphed into objects that can be bid upon at auctions, traded between teams.

Gros suggests that walking is the sort of movement that is intentioned to slow you down, to integrate your body with a locale or neighborhood or even a dank forest path. And in moving in this deliberately “purposeless” manner, it can temporarily distance you from other concerns. Long walks through the city, unlike motorized rides, force you to attend to details or obstacles on the pathway: potholes, rubbish piles, a stray chicken, shifts in the ambient temperature, a mild drizzle.

And perhaps, what has to be relished is our separation from routine comforts – whether that be a metro ride, or the airconditioned, music-satiated ennui of a car. And in being removed from convenience, you are also fleetingly liberated from the noises and pressures of the marketplace – the radio ads, the social media notifications, the tugs of digital commerce. Despite or perhaps because of the discomfort your body experiences, you discover a new freedom.

More astonishingly, you survive. As Gros observes, “Not only does your world not collapse within these disconnected moments, but those connections suddenly appear to be burdensome, stifling, over-restrictive entanglements.”

Of course, the end of the walk and the return home is equally welcome. And even as you get back to your stressful household or workplace routine, your body still recalls that you can inhabit simplicity – without the material excesses and persistent throbs to achieve this and that. It is what Gros terms a “suspensive freedom,” occupying a temporary space and time, where other troubles and your own role in a commercial landscape don’t intrude.

Besides such short pauses, the philosopher also contends that walking can trigger more searing “transgressions,” willful escapes from the artifices of culture and civility towards our more elemental selves. Sort of like a retreat into the wilds, where we commune as the animals we all are, with sands and stars, and stop reflecting on unpaid bills, the valuation of a startup or a child’s worrisome school performance. In this kind of more deliberate and perhaps even violent departure, “you escape from the very idea of identity, the temptation to be someone, to have a name and a history.”

While being “someone” might be critical to parading your coolness at a cocktail party, or at a job interview, or even as a founder pitching yourself to an investor, the walking body is intended to evade such narratives, to become “just an eddy in the stream of immemorial life,” to remember how miniscule you are among swirling galaxies.

As the writer Jack Kerouac writes in The Dharma Bums, walks can physically distance us from “all that crap [we] didn’t really want anyway, such as refrigerators, tv sets, cars…certain hair oils and deodorants and general junk you finally always see a week later in the garbage anyway.”

Walking even on familiar or repetitious routes across tarred roads, or cobblestoned paths, across mountains or plains, changes the body’s sense of its own mortality and its relationship to eternity. Perhaps we have always been here and always will be – alighting on a new view, on a shaft of light through trees, on leaves gently drifting towards moist soils.

Gros also advocates “slow walking” as opposed to hurried, jerky movements imbued with the anxieties and measures of the industrial age. As he observes, “when you hurry, time is filled to bursting, like a badly-arranged drawer in which you have stuffed different things without any attempt at order.” At the right pace, we don’t just pause and take in the sights, we inhale the eucalyptus scents, taste the rain-lashed air, and become as closely intertwined as we possibly can, with all the hues, textures and flavors of the landscape.