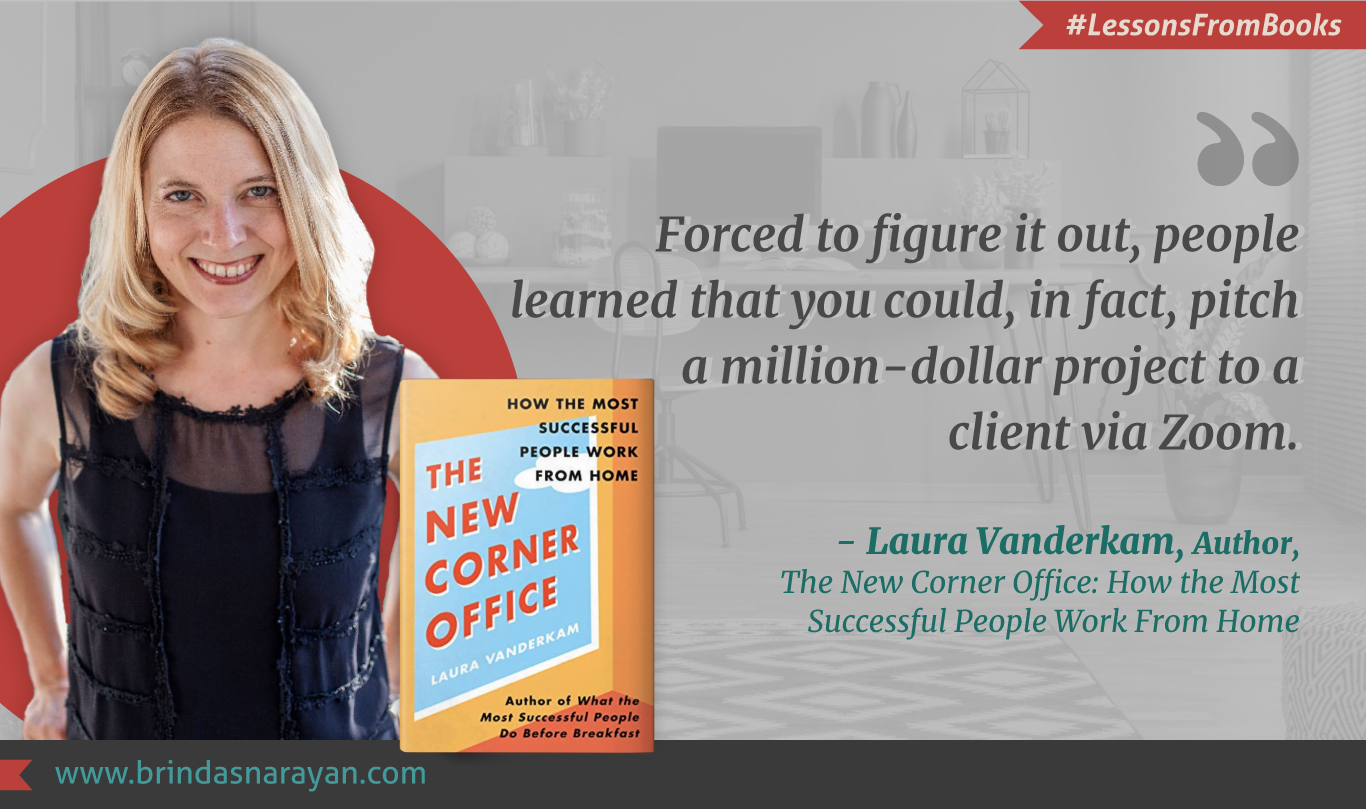 Laura Vanderkam studies the one resource that is most precious, most scarce, and rarely granted the attention it deserves, until is one is confronted by a large-scale crisis like the pandemic or by a terminal diagnosis: time.

Cultivating a rare expertise in personal productivity and time management, in previous books, like “I Know How She Does It,” she studied 1001 Days – the time-logs of women who juggle family, high-powered careers and personal passions, and who still seem to manage the elusive “all”. Strikingly, many of her subjects also had aged parents to care for as well as other community commitments.

One of the lessons she gleaned from her interviewees was that often mindset matters more than the physical time available. In other words, if you don’t achieve a personal or professional goal over five years, for instance, learn Japanese, exercise more, network meaningfully or mentor other women, it’s not because you lack time. That goal is not a personal priority. As Vanderkam phrases it in her much-watched TED Talk: “We don’t build the life we want by saving time. We build the life we want and time saves itself.”

Now, as the Founder and CEO of her own work-from-home business, that includes books, podcasts, speeches, her blog, engagements with corporates, and as the parent of five children, she is uniquely qualified to offer tips to optimize WFH, the acronym that designates the now-familiar and occasionally dreaded grafting of white-collar work into domestic spaces.  Directing her time-optimization lens on the contemporary blur of work, home and family, in The New Corner Office she draws from her own personal experience of working from home for 18 years, as well as from interviews with other successful professionals who operate remote businesses.

So how does Vanderkam suggest we navigate the new environment?

Manage by Task, and Not by Time

In 2008, when Meredith Monday Schwartz started helming a new company that helped couples find wedding venues, she opted to work from home for a few weeks in order to care for a new puppy. She was also the parent of three kids, and so naturally, she had to juggle the pup and children. Strangely, she found that her home-based stint was far more productive than she expected. Gradually moving to a hybrid model, wherein employees worked from home for a few days each week, the company “Here Comes the Guide” shut down its offices in 2016.

With 24 people working remotely, including in various cities, the company gets together only twice a year. All other work, booking venues, generating content, marketing their services is done from home, and via remote collaboration. Meredith’s biggest takeaway from the success of their remote work, was to “manage by task and not by time.” Employees were reviewed based on outcomes, and not on hours spent.

Pre-plan Your Weeks, Rather Than Days

Vanderkam suggests we plan our weeks, rather than days; in other words, set up a plan for the next week, for instance, on every Friday.  Each Friday afternoon, she sets up lists under three categories: “career, relationships, self.” She also suggests that during that time, you can revisit commitments already made, and shuffle them around if needed.

The daily to-do lists, drawn from the weekly plan, have to be achievable. Not wish lists. “Ideally, your to-do list is short enough to become a contract with yourself.” With five children, Laura herself has managed to complete her lists almost every day, including on days when she had to spend five hours in the Emergency Room with some medical emergency. But as she puts it, to those who might be daunted by such consistent super-achievement: “This is not because I’m superhuman. I’m not – and so I create to-do lists that don’t require me to be.”

One of the advantages of having such a list jotted down is that it also signifies when your workday ends. In other words, you can shut down your laptop or computer with guiltless relief, because you have achieved the tasks you set out to do.

In a HBR article, the researchers Teresa Amabile and Steven J. Kramer summarize findings from the diaries of thousands of knowledge workers. They found one of the biggest motivators that drove individuals and teams was a “sense of progress.” They termed it the “power of small wins.” So make your to-do lists small enough to grant you a feeling of triumph, at the end of most days.

In monasteries, a certain “template” for behavior is set by morning chants, evening prayers and set meal times. This disciplines the monks into a certain ritualized behavior that guides their rhythms through the day. Vanderkam urges work-from-home employees to determine what rhythm works best for each of them. For instance, early risers can break for an afternoon walk, if they prefer to do so. Night-owls can work later, staying up into the wee hours, writing code or solving client problems. Of course, most organizations would also have to schedule overlapping hours, so that members can reach out to each other if necessary.

But setting up your own personal rhythm also means knowing your own body and mind as well as you possibly can. The other significant aspect is that you need to ensure that you get your “deep work” done when your energy levels peak. For many people, these tend to be morning times, soon after a much-needed coffee. Usually, afternoons, especially after lunch, tend to be slacker periods.

Organizations that mandate morning meetings are likely to eat into high-productivity times, when employees would be better off tackling more challenging tasks.

Vanderkam observes that many managers were needlessly anxious about remote work, and especially because employees might spend all day binge-watching their favorite shows rather than engaging in office tasks. As it turned out, the data gathered over the past year, has shown for the large part, that productivity has only climbed in many cases, or at the very least stayed unchanged. And all this with lower office costs, and without hassling commutes.

But on a personal level, some employees might feel they do occasionally succumb to distractions more than they would like to. So how can they stay focused and on task, especially when the doorbell rings, and while picking up the Amazon Delivery, they also notice the mugs on the living room couch, and when tripping off to the kitchen, recall that the rice wasn’t soaked for the morning’s dosas? Vanderkam’s point is this: if you weren’t answering the doorbell when at office, do you need to respond to it now? Can you stay as unmoved by that ring, as you might have been, if you were miles away, at your workplace cubicle?

Besides physical distractions, there are the constant pings of online seductions. While writing a report on the automotive sector, you may need to Google a particular statistic, and while searching for that data point, you are tugged in by a saree ad, and before you know it, you have tumbled into a pocket of wasted time. For internet research, she suggests you use what journalists call “TK” – a scribbled stand-in for “To Come”. In other words, embark on such research only at a designated time. Moreover, try not to schedule research tasks during your most productive hours. You can also use a “Later” list to keep jotting down tasks that you need to perform, after your current, difficult report has been completed.

Many folks resort to the Pomodoro Technique – which involves 25 minutes of focused work, followed by a 5-minute break. After you establish your own personal capacity to focus, you can extend the time to 45 minutes or an hour, or even lower it to 10 or 15 minutes. After all, attention too, is a muscle that often takes months and years to build. Many people swear by this technique, and especially the physical act of setting a timer that goes off. During the time the timer is still on, you should not permit your “mind” to wander into other areas. It’s easy to stay on task, because you can persuade yourself that it’s just 25-minutes of staying with something that might seem enervating or frustrating.

She says, once you are using your time more consciously, you should ideally schedule breaks that involve at least one “physical” activity and one “social” activity. The physical activity could involve a walk outdoors or even indoors, or a simple stretching routine or anything else that boosts your energy. The social activity can involve a chat with a colleague, friend or relative – something that takes your mind off the stressful task you are trying to complete.

Vanderkam also recommends keeping one day “open” every week. For instance, she herself designates Friday as an open day, so that she can handle any spillovers from the week on that day. This helps her gear up for unexpected emergencies or unforeseen tasks.

For teams that work in a collaborative mode, she suggests they designate a few hours as “open” – for instance, 90 minutes in the afternoon, so that contingency work can be fitted into those slots. Because the reality is that unplanned work or personal tugs do affect nearly everyone. And planning in advance for the accidental or unpredictable can ensure that you remain reliable, despite your circumstances.

Ushering the Water Cooler Chats into the Zoom Era

In general, Zoom meetings and other video interactions are found to be at least 75% as effective as in-person get-togethers. Unless you are scheduling a formal “happy hour,” she suggests introducing a timed “chitchat” for teams that are working together. Or the moderator can ask a social question of each group member, so that everyone chimes in with some fun or personal tidbit and the extroverts don’t dominate.

Some organizations have started virtual book clubs, to facilitate semi-formal discussions around topics that might be relevant to the industry (or maybe even on other topics, if the team wants to expand its horizons). A few companies have introduced “home office tours”, wherein employees lead others through a virtual tour of their home or terrace garden, and perhaps even introduce them to family members.

In sum, Vanderkam assures you that you don’t have to pare down your ambitions just because you are working from home. You can be running your own business, and plan to build it out into a personal empire, even if you are merely occupying a small section of your bedroom, as opposed to a wood-paneled corner office in some fancy glass tower.

Perhaps, folks, this is the time to think big, expand your professional lives, and keep the bucks rolling in, so you can afford to tick off those post-pandemic bucket lists.