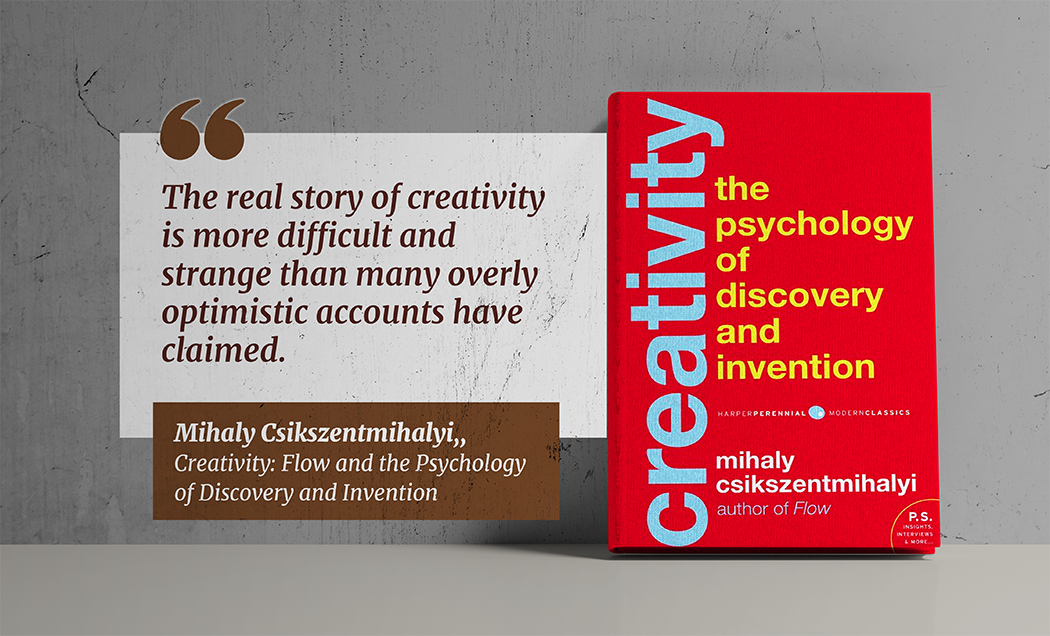 Lessons from Books: The Ten Dimensions of Highly Creative Personas

Driven largely by the success of Apple and also by its founder’s layered persona, “design thinking”, has spawned many corporate workshops, process changes and adopters. After all, if Steve Jobs, who was as obsessed with the appearance of things, as with their functions, could foster such a technology behemoth, then surely the methods used by designers could usher new products, experiences or even ways of being? Humans, however, have always been fascinated by creators well before “design thinking” infiltrated our buzzy online chatter.

More pertinently, what are some of the traits of highly-creative individuals, that differentiate them from laypersons? This was a question that also intrigued a man called Mihaly Csikszentmihalyi, a psychologist at the University of Chicago. His interest was sparked off by an earlier study that he had conducted, when he wanted to understand the drivers of human happiness. As a result of his much-cited study, he coined the term “flow” – to describe how people feel when they are engaged in an activity that has clear goals and for which they have the necessary skills. Examples of “flow” activities can include jogging, cooking, knitting, painting, conducting a science experiment or working on an Excel Sheet.

Csikszentmihalyi then shifted his attention to studying the habits of highly creative people –those who had garnered very high levels of recognition like Nobel Prizes, Pulitzers, MacArthur Genius Grants and so on. He found such people seem to experience more “flow” or a higher life satisfaction, on average, than normal people. He wanted to unearth the attributes of such people, so that the rest of us can incorporate certain aspects into our own lives, to increase our experience of flow.

To begin with, he defined creativity as an act that “transforms” an existing domain. In order to do this, the creator must first master a symbolic domain – whether that is music, or astrophysics, or cooking. And then, after many years, when one is sufficiently proficient, one must impress the “field” or “gatekeepers” with one’s proposed transformation or original contribution. For a startup, gatekeepers might include investors; for a scientist, the field might comprise of journal editors and peers.

Of course, by limiting his study to those who have won recognition, Csikszentmihalyi was conscious that he may not capture creators who are not currently lauded, but who will be admired by posterity. After all, in his own lifetime, Van Gogh was impoverished and unknown, just a strange man who painted weird paintings. His reputation was resurrected many years after his death.

The psychologist was also aware that some creators may not be the easiest people to interview. Among historic figures, Leonardo Da Vinci was considered a recluse and “almost compulsive in his behavior.” Isaac Newton and Thomas Edison would have hardly made for scintillating company “at a party.” And neither would Michelangelo, Beethoven, Picasso and Einstein.

In general, creative people often possess “lofty aspirations” that transcend material notions of success. Max Planck wanted to gain an understanding of the Absolute; the poet Gyorgy Faludy, who started writing poems at the age of 7, was afraid to die. His poems were a means to defy death.

While acknowledging that many creative personas may defy “stereotypes”, one of Csikszentmihalyi’s significant conclusions – after extensive interviews with many contemporary creators – was, in general, their personalities embody more “complexity” than that of the average person. As the author puts it, “instead of being an individual, each of them is a multitude.” In his book, he encapsulates the significant dimensions of such complexity.

The Ten Dimensions of Complexity in High-Achieving Creators:

Trait 1: They often seem to have a great deal of physical energy, but they also spend long periods in quiet and rest.

Trait 2: They tend to be smart (though not all are possessed of as extraordinary an IQ that people might assume they have).

Trait 3: They are Playful and Disciplined

Trait 4: Alternate between Imagination/Fantasy and Reality

Trait 5: Creative People are Both Introverted and Extroverted

Trait 6: They are both humble and proud

Trait 7: They usually do not conform to gender stereotypes

Trait 8: They are both “traditional” and “rebellious.”

Trait 9: They are passionate and objective

Trait 10: Their openness and sensitivity can trigger a great deal of suffering/pain and also enjoyment.

Besides charting personality traits, Csikszentmihalyi’s book wades into many other aspects of creativity, and I hope to return to it in future blog posts.