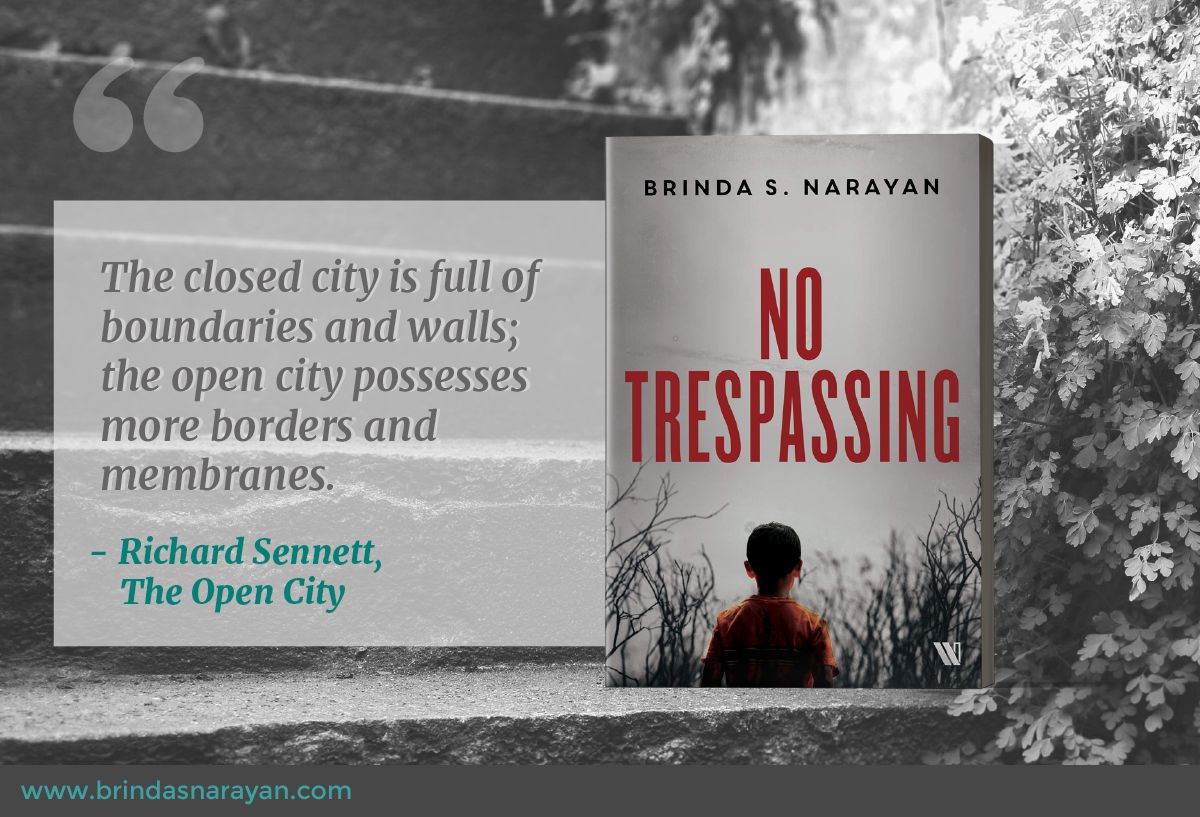 Living in Gated Spaces: My Impetus for Writing No Trespassing

I’ve lived in gated spaces for many years. Mostly inside apartment complexes, and more recently, inside a project with townhomes and villas. While none have been as elite or as exclusive as Fantasia, the fictional setting in No Trespassing has echoes of the places I’ve inhabited. It’s a very convenient life for people from the middle and upper-middle class – for one thing, you get a 24/7 supply of power and water, access to a host of amenities like a pool and a badminton court – and you also feel like you belong to a community, which shields you from the alienation that many city-dwellers experience.

However, one cannot evade the fact that when we are gating spaces, we are cementing or hardening the barriers between classes. These are places that offer security for a certain class, but surveillance for others. As the sociologist Richard Sennett puts it, it’s not an ideal form for the city at large, if you want to forge more egalitarian or ambivalent urban spaces. Sennett advocates for an “open city” with porous borders and flexible buildings that fuel the emergence of organic and unexpected stories.

Unfortunately, in India, creaking mega-cities struggle to cope with the rising aspirations of the middle and upper-middle-income groups. Growing incomes lead to intensified demands for reliable power supplies or access to sports facilities which were earlier available only to the privileged members of gated clubs – like neighborhood clubs, or swanky city clubs.

Historically, before the mushrooming of such gated apartments and villa complexes, cities were already stratified into upper income neighborhoods, middle income neighborhoods; Bangalore, for instance, harkening to divisions in the colonial era, was divided into the Cantonment and the City areas. While the Cantonment area tantalized with Europeanized layouts, “natives” occupied the more disorderly City area.

In the seven decades since Independence, as the Garden City morphed into the “Silicon Valley of India,” the “startup capital” or the nation’s “cosmopolitan future”, Bangalore/Bengaluru continued to be tugged by contending forces. In an essay (1992), written soon after India liberalized her markets, Baraguru Ramachandrappa colorfully describes the urban and rural dichotomies which marked residents in the State capital: “jean pants on the outside, madipanche [dhoti] on the inside”, “the consciousness of a bullock cart soaring in an airplane.”

Even as the technophiles of the city have physically and metaphorically moved beyond the village, the yearnings for a bucolic life that evades the traffic snarls and garbage pileups, or for neighborly bonds that mimic a real or imagined past, have only grown stronger. After all, spaces and lives are marked not merely by material acquisitions, but also by social relations that imbue such progress with meaning.

Besides, growing wealth, power or privilege of any sort, is often accompanied by attendant anxieties of their loss. Highly-securitized gated complexes are partially a response to ballooning fears, even as they promise to shield occupants from the untidiness outside. Also, in the modern era, many of the certainties of the past have vanished. People can no longer bank on lifelong jobs, on growing incomes, or even stable friends (for in the globalized sphere, movements across geographies are common and frequent). When life seems increasingly liquid, the attempt to solidify “security” also represents the desire to buttress lives from uncertainties.

Moreover, the environmental psychologist Florence Ladd notes that people often seek to recreate childhood settings as they resettle into different homes. Gated communities are almost like nostalgic reconstructions of small-town or village settings inside the bustling anonymity of the city. In the Indian context, a few people who are in their mid-life and who currently belong to the middle or upper-middle-class have grown up in colonies spawned by Public Sector Enterprises, like Coal India or FACT or HAL or in townships built by large Private enterprises like the Birlas and the Tatas. They carry vivid memories of friendships that extended across age groups, between families who were drawn in from different parts of the country to serve these enterprises. That longing for the old colony drives them to seek new communities in a rapidly changing environment.

As a writer, besides being intrigued by the effects of gatedness on the city and on excluded communities, I also wrestle with what gatedness does to its residents. One aspect I’ve tried to evoke, is the fear and loathing that my characters experience when they wander into the village outside – the physical and psychological discomfort evoked by the grittiness of the city, after living in an environment where the lawns are shaved and the bushes clipped, and life is pretty much ordered or regulated. Especially for children who have been raised in such environments, there can be a heightened fear of the “other” and of the unknown. As Sennett points out, living in a more homogenous environment can constrain creativity – because your views are not being tested or refined by people who think or live in alternative ways. These are issues I continue to wrestle with, and I hope the book evokes a similar disquiet in readers.

Low, Setha, Behind the Gates: Life, Security and the Pursuit of Happiness in Fortress America, Routledge, New York, 2004.