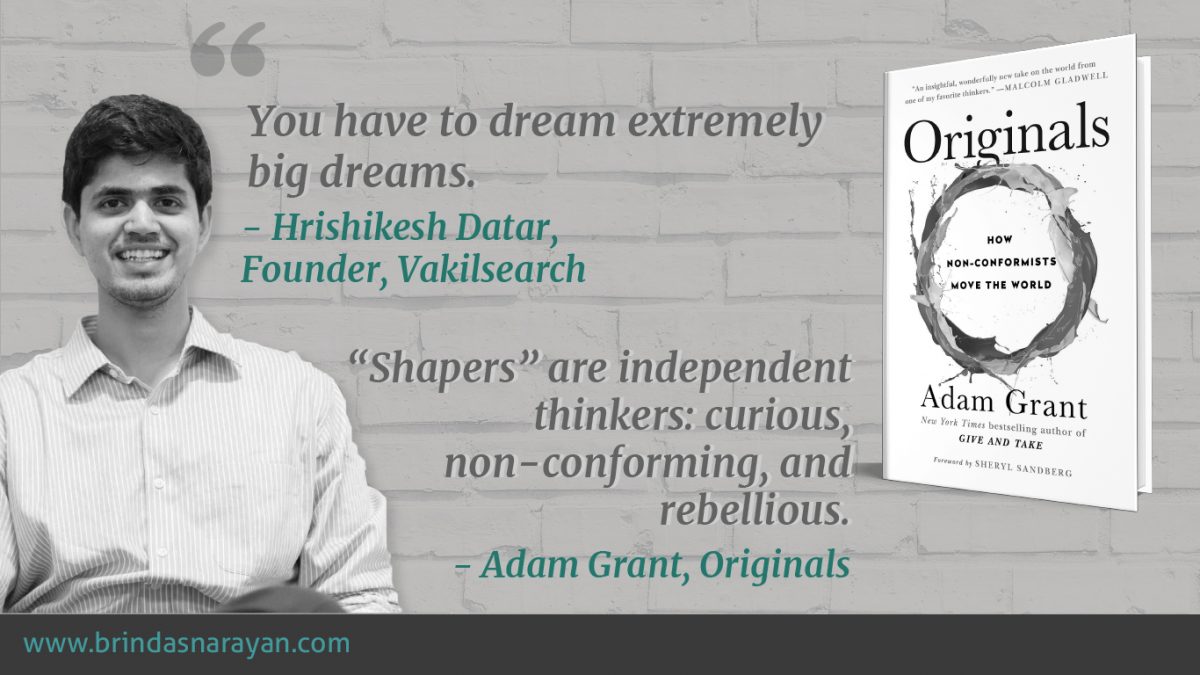 In the concluding passage of his Acknowledgements, Adam Grant, Wharton Professor and author of Originals, thanks his three children for compelling him to unlearn many of the lessons that adults take for granted. After all, as someone fascinated by the mindsets and processes that create Original thinkers, Grant himself had to forge a creative path while penning his thoughts. His book does dispel familiar myths about creativity while also highlighting recent research to foster originality in both individuals and organizations.

Successful Entrepreneurs Can Be Risk-Averse

The term “entrepreneur”,spawned by the French-Irish economist Richard Cantillon, means “bearer of risk.” However, Grant was to learn, through a humbling personal experience, that often, successful founders are not less risk-averse than the average person. At Wharton, a few students pitched an idea to him about selling spectacles online. As a potential investor, Grant was dissuaded by the founders’ disclosures that they had accepted full-time jobs at mainstream companies while building their enterprise. He thought their commitment to the idea was feeble. If they were unwilling to forgo regular incomes and other conventional tugs, how would they ensure the success of the new firm?

As it turned out, his analysis was flawed, and Grant missed an opportunity to invest in one of the most successful online enterprises. The company, Warby Parker, was valued at $1 Billion in 2015 and headed the Fast Company list of the world’s most inventive companies.

Grant was to later realize that the creators of Warby Parker, who seemed to hedge their bets by sticking to stable jobs till they were sure of their startup’s future, were not atypical of successful founders. He cites a surprising study by Raffiee and Feng, that reveals that “entrepreneurs who kept their day jobs had 33 percent lower odds of failure than those who quit.” Even someone, like Bill Gates, Grant argues was more risk averse than his actions seemed to indicate. Though he quit Harvard to found Microsoft, he had already executed the software sale a year before quitting college. Moreover, prior to quitting, he sought a “Leave of Absence” from the university, ensuring an opportunity to return if his enterprise did not take off.

Hrishikesh Datar, the founder of Vakilsearch (https://vakilsearch.com/), had already decided on founding an enterprise while at the National Law School (NLS) at Bangalore. But he waited to finish his law degree to embark on his venture, retaining the option to switch to a mainstream legal career in case his business did not succeed. He also wisely leveraged his time at NLS, founding the entrepreneurship cell at the Law School, and forging relationships with the startup hub at IIM Bangalore (NSRCEL). His firm, Vakilsearch, offers technology powered solutions that facilitate the grueling paperwork and cumbersome procedures required of businesses (incorporations, registrations, annual compliances and so on) and individuals (property agreements and tax filings).

Role Models Can be Drawn from Fictional Characters

Datar, like many young lawyers, was attracted by the idealistic vision of contributing to social justice. In particular, he was inspired by The Rainmaker, a John Grisham book that dwells on a small law firm battling giant insurance companies that were evading payouts to desperate families. He was also galvanized by national leaders like Vajpayee, who elevated the level of Parliamentary debates. Grant emphasizes that other leaders have also been inspired by fictional works. Both Sheryl Sandberg and Jeff Bezos point to the space-time shattering A Wrinkle in Time as a source of stimulation. Elon Musk and Peter Thiel were drawn to Tolkein’s magical Lord of The Rings, while Jack Ma cites Ali Baba and the Forty Thieves. An advantage that fictional characters wield over real-life personas, is that they can bend all rules, expanding the aspirations of creative thinkers beyond the confines of real life.

Creative Thinkers Expand Their Knowledge of Other Domains

Hrishikesh already wielded an advantage over other most other residents of the city he grew up in. As the second-generation of a migrant family, Hrishikesh grew up in a Marathi household in Chennai. While he inevitably picked up Tamil from the larger environment, he spoke only Marathi at home. In urging thinkers to intentionally diversify their experiences, Grant observes that people who have worked inside foreign cultures or are fluent in more than one language are naturally more creative than their monocultural counterparts.

Besides his knowledge of many languages (and subcultures), Datar also expanded his horizons beyond the legal domain, envisioning the promise of emerging technologies. He says that NLS accorded sufficient free time to students, fostering the exploration of topics beyond classroom discussions. Hrishikesh already had a sense, as the son of a lawyer, that the Indian legal system was broken in many respects. “Most of our laws were built by the British to impose colonial rule on an enslaved population,” he observes. He had also witnessed how cumbersome and opaque procedures continued to be. At the same time, while at the NLS, he watched the internet torpedo into various spheres, ushering an astonishing level of ease and transparency into hitherto arcane processes. He intuited that the legal sphere could be simplified and broken into understandable chunks through technology. As Grant says, “originality increases when you broaden your frame of reference.”

Besides wrangling with complicated laws and the intricacies of running a business, Hrishikesh loves to paint. He sketches and dabbles with water colors. He believes his childhood pursuit of painting had seeded a desire to be original. “Entrepreneurship is like having an open canvas. In most other legal careers, you have to grow inside the four walls of an institution.”

In an extensive study of scientists, that compared Nobel-winning scientists with equally educated peers of their era, the Nobel-winners were found to pursue various creative arts along with their scientific careers. These pastimes ranged from theatre, music and creative writing to crafts, painting, or even magic. Such exertions were not merely a form of stress-relief. They turned the scientists into more creative researchers. For instance, even the ancient Galileo was a painter. His telescope was not powerful enough to detect mountainous regions on the moon. But as an artist who dwelt on light and its absence, he sensed that dark patches indicated mountains – a discovery that eluded fellow-observers. Another study, cited by Grant, found that many entrepreneurs also consciously pursued “leisure time hobbies that involved drawing, painting, architecture, sculpture and literature.”