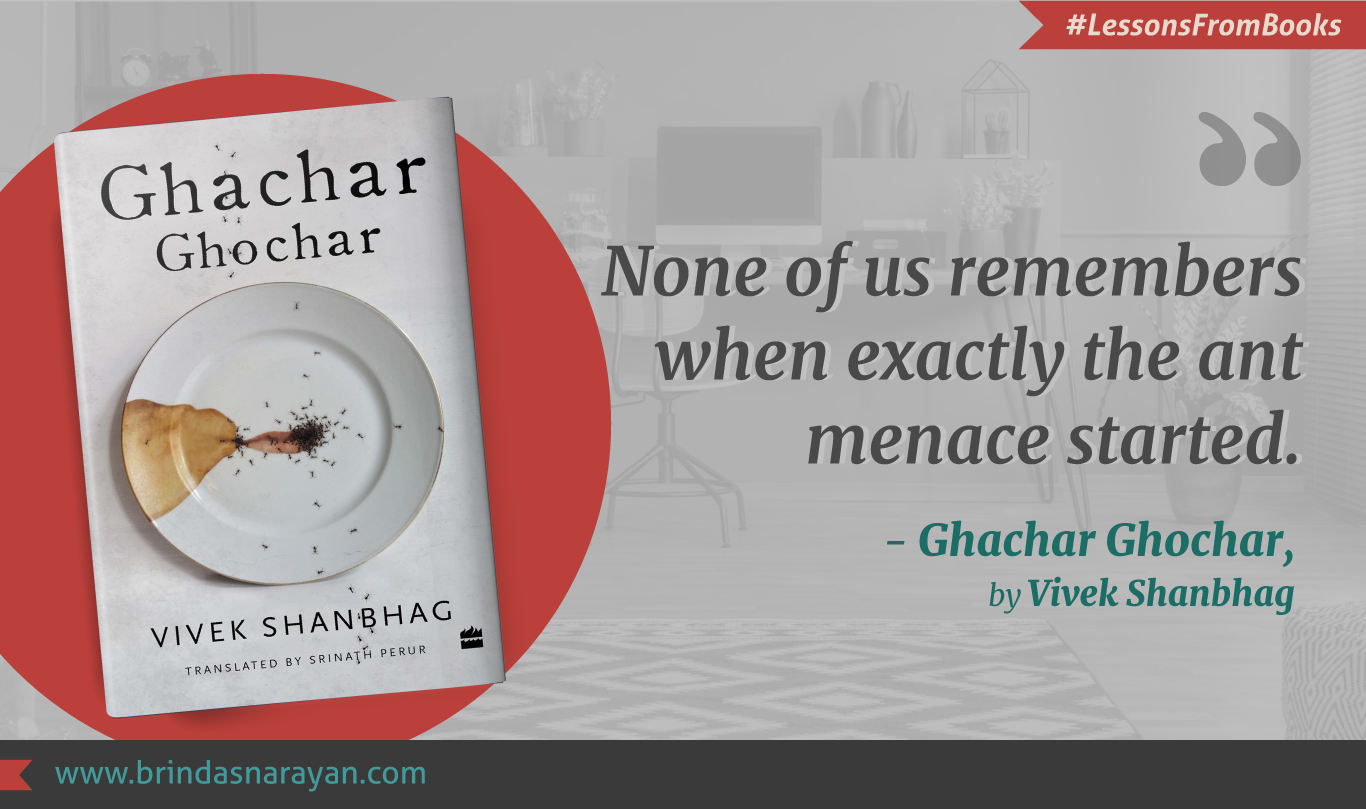 Ghachar Ghochar begins in a space that evokes an older city; a Bangalore, that was not yet tugged into the frenetic material spiraling engendered by the IT and outsourcing businesses. But the city outside has already morphed. And so, has Coffee House, the “high-ceilinged” café, bar and restaurant that bears witness to the shifts. Like Vincent, its all-knowing, watchful waiter who dishes out pithy advice or directs empathizing glances at the regulars, it abides with the unexpected just as it does with the humdrum.

That is one of the magical aspects of this brilliantly-crafted, tightly-wrought work of fiction. The ordinary is extraordinary, and seemingly innocuous events portend ominous sequences. A joint family of six members, that was earlier teetering on the tenuous edges of the lower middle-class, making do on the barely-sufficient but honestly-earned salary of the household’s patriarch moves up the socio-economic ladder. And inhabits the more prosperous, more unconcerned space of those flush with business earnings, even if the means by which that business is run seem ethically unsettling.

The social strides are preceded by a symbolic invasion of the earlier house. By two varieties of ants. A black variety, that seemed to have no purpose, apart from flustering the human beings who lived there, with their sheer number, and hither-thither scattering. And then a “brown variety with more intelligence.” These were fierce and quick to sense the slightest human misstep: “They’d gather around rings left by tea cups on the floor. A mortar used to make chutney and washed a little casually? Ants. Coconut grated and shell left lying around for a minute? Ants to finish off any remaining specks.”

Such tiny creatures, but the way the household tries to rid itself of them has echoes of something deeper, and darker. Like the manner in which this tightly-knit Indian family can cohere – even with a menacing and ruthless concert – against outside forces, against anything or anyone who threatens their unstated fellowship. Seeding a sinister sense of what is to come later, the protagonist says: “We had no compunction towards our enemies and took to increasingly desperate and violent means of dealing with them.”

Shanbhag also captures the subtle psychic shifts between the old economy – which was mostly about getting by with little – and the new. In the less comfortable house, which consisted of a series of rooms, like “train compartments”, sparsely furnished with barely any light, desires were also reined in. Such minimalist living, even if involuntary, fostered a kind of temperament that the consumerist set would find difficult to identify with: “When you have no choice, you have no discontent either.” Moreover, scrimping for each rupee ensured a kind of intimacy: each person had to account for expenses. Decisions were made collectively, the sacrifices painstakingly apportioned or shared.

But money changes everything, and not necessarily for the better. With more expansive finances, a new independence bursts in. With a keen eye for how this can be simultaneously liberating but also throttling, the unnamed narrator observes: “It’s true what they say – it’s not we who control money, it’s the money that controls us. When there’s only a little, it behaves meekly; when it grows, it becomes brash and has its way with us.” The honest patriarch is already losing his hold on his younger businessman brother, the Chikkappa, who is now girding the family’s fortunes with Sona Masala, a business that sells packaged spices. For instance, a fiery older sister becomes more intensely and even uncaringly independent. Eating out whenever she pleases, without having to answer to anybody.

There are also the tangles between mothers-in-law and daughters-in-law. Two sets of them, precisely. In any other author’s narration, these could have easily turned into clichés. But in Shanbhag’s deft telling, the familiar manages to grip and surprise. According to the novelist Vladmir Nabokov, as articulated through his protagonist in The Gift, “Any genuinely new trend in art is a knight’s move, a change of shadows, a shift that displaces the mirror.” In a very concise manner, inside an astonishing 30,000 words or less, Shanbhag achieves Nabokov’s diagonal advances. He keeps the reader disoriented and unsettled. There is rarely any melodrama, only a few emotional outbursts. In fact, the pages are filled with silences, with words unspoken rather than hysterically hurled between characters. The differences and collisions are ongoing, but understated.

That said, I cannot overstate my admiration for this book. If you are a fluent Kannada reader, you should pick up the original. I read the English version, translated by Srinath Perur, and I must acknowledge Perur’s role for such a skillful translation and for making this imaginatively-spun, unconventional novel accessible to all English readers. The book has also been a finalist for the Los Angeles Times Book Prize and longlisted for the International Dublin Literary Award. Accorded rave reviews in The New York Times and The Guardian, among other international outlets, it has pitched the city into global attention. Rather unusually, not for its engineering and software prowess, but for its literary talent.