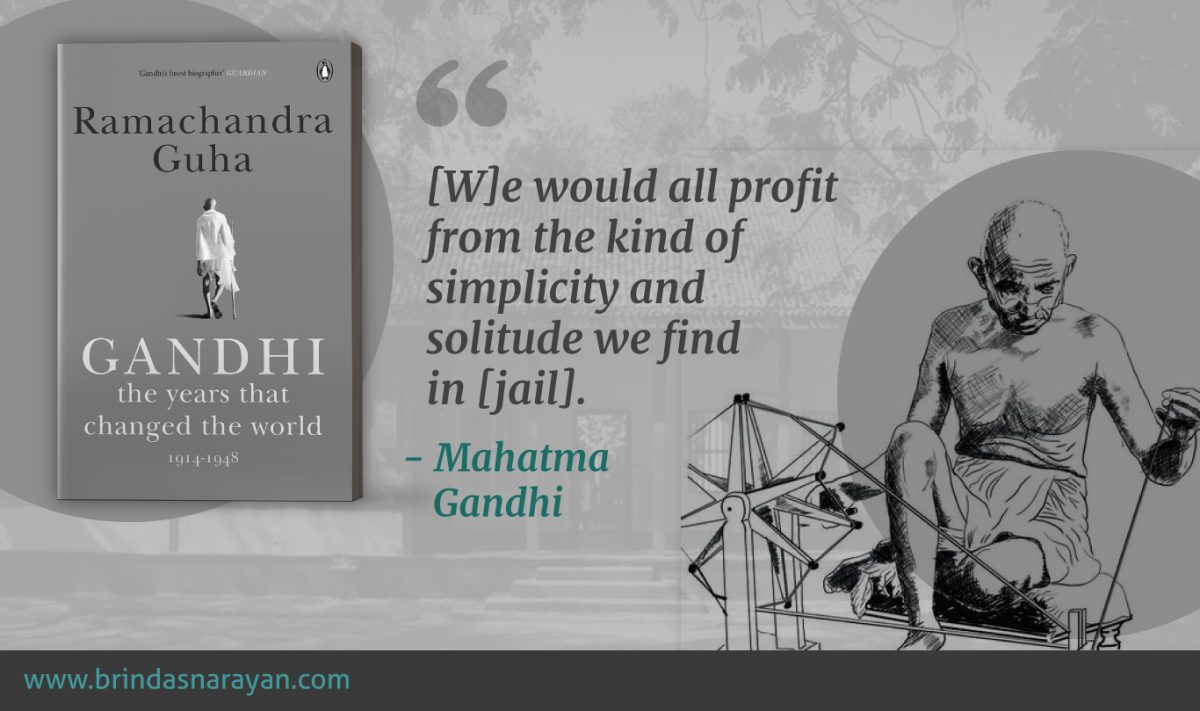 Lessons in Leadership From Gandhi’s Life Inside Prisons

In the historian Ramachandra Guha’s extraordinarily-researched, brilliant chronicle of Gandhi’s life, one gets a fascinating glimpse of his life inside prisons. After all, the nation’s leader often courted arrest for willfully defying unjust laws. For a man who was renowned for being frenetically active, and constantly surrounded by friends, colleagues and followers, one wonders how he spent his time in confinement, which lasted for weeks, months or even years.

After each arrest, Gandhi was prepared to martyr every aspect of himself

In the month of January 1908, a Baptist minister named Joseph J. Doke encountered Gandhi for the first time. The Indian activist-lawyer was, at that point, forging his satyagraha movement to seek the rights of fellow-Indians in South Africa. Doke, by then, had already heard about the gritty leader. Quite naturally, he expected to meet with an imposing figure, someone possessed of a commanding height and with a “masterful” face. Instead, he was surprised at how small and ordinary Gandhi was. But despite his lithe body and his negligible weight, when he courted arrest for the first time, Gandhi wielded a formidable inner resolve to martyr everything – his time, his freedom, and his life itself – to serve a larger ideal. Because when Doke asked him how much of himself he was willing to give up, he responded: “It is a matter with me of complete surrender…I am willing to die at any time.”

To perhaps embody or even dramatize his willingness to sacrifice everything, Gandhi often asked judges to accord him the heaviest penalties for defying their laws. For instance, in 1908, he asked to be incarcerated for six months, with hard labor and a fine of 500 pounds. The judge however, gave him a lighter sentence – only two months without hard labor.

For Gandhi, the dignity of labor was more than a mere slogan. Besides voluntarily engaging in physical tasks inside his Ashrams, he was often given or sought sentences that involved “hard labor”. In his letters home or to friends, he rarely complained about the strenuous tasks.

In the Volksrust Prison, he was ordered to dig stony soil with impossibly hefty spades, so much so that his hands were “covered in blisters.” At a future term, the work involved “repairing roads and weeding fields.” Later, at a prison in Pretoria, he was made to polish floors – both inside his cell and in the corridor. And yet in a message to Kasturba, he assured her of his happiness, reminding her that his mental state was more pertinent to his emotional well-being than any physical situation.

During his prison terms in India, he added “spinning” to his list of everyday tasks of prayer, reading and writing.

Inside some prisons, he was treated as badly and sometimes worse than the other prisoners.

Despite being a conscientious objector to oppressive laws, whose infractions could hardly be considered on par with murderers and other criminals, Gandhi was often housed with inmates whose crimes were not politically or morally instigated. At Johannesburg’s Fort Prison, he shared a cell with a dozen others and was made to sleep on a wooden plank, with “an apology for a pillow.” The food, a mealy porridge, wasn’t to the leader’s liking. During another sentence, he was violently lifted by a fellow-prisoner and hurled to the ground. Fortunately, he was able to grasp a door knob on the way down, or his fractured skull would have shattered the past as we know it.

He spent most of his stints reading and writing, whenever permitted to do so

At the Fort Prison, the prison authorities eventually conceded to Gandhi’s request to continue his reading and writing. So, they placed a table with an ink-pot and a few pens inside his cell. The leader had already carried a few books inside with him – a habit that was to persist through all his prison sentences.

Often, however, his writing was withheld or censored. He wasn’t allowed, during most terms, to touch upon political issues in his letters. Other times, he wasn’t permitted to write in Gujarati (presumably because the authorities could not interpret and censor the messages). During some terms, he was permitted to send letters out only once a month.

It’s fascinating that for a leader who inspired one of the world’s most iconic resistance movements, he read very few political theory or history books. Instead, he devoted most of his time to religious books, across all religions. At the Johannesburg prison, he carried the Bhagavad Gita with him, and also some books by the Russian novelist, Leo Tolstoy, by or about the social thinker, John Ruskin and the philosopher Socrates. Besides, the books he had already carried with him, he actively borrowed works from the prison library, including a work by the Scottish philosopher, Thomas Carlyle and the Bible. He even discussed the Bible with a Chinese fellow-prisoner, turning the jail into a convivial intellectual space.

In a future term, he read stories by Tagore and the American novelist, Upton Sinclair (who had personally mailed his books to the iconic Indian). When entering the Yerwada prison (in Poona), he carried the Gita, the Koran, the Ramayana, a copy of the Sermon on the Mount and an Urdu guide.

Even inside prisons, Gandhi identified with the conditions of the most marginalized inhabitants

At South Africa, as more Indians followed the example of their moral leader, they were accommodated inside tents in the courtyard. Gandhi immediately requested a move to the tents, as he could no longer brook his more comfortable cell. Always attuned to injustices, he noticed that Christian prisoners had access to a Chapel. So, he requested that Muslims and Hindus be permitted visits by an Imam and a priest.

Once, during another term, he was transported to a different prison to appear as a witness. After riding in the third-class compartment of a train, he was given the choice of taking a cab to the prison or walking. He chose to walk, lugging two heavy bags with him. Two Tamil hawkers happened to catch sight of him in his prison clothes – “jacket with a numbered badge, short trousers and leather sandals.” The vision of their leader, dressed like a convict, and trudging up the road with weighty bags was reported to one of Gandhi’s faithful friends, Henry Polak, who promptly protested the treatment to authorities.

Given his general affability, Gandhi befriended many of the prison warders

With his philosophical belief that both oppressors and the oppressed were victims of an unjust system, Gandhi often befriended his warders (and famously won the hearts of some judges who pronounced harsh sentences against him). At the Volksrust Prison, before departing, he gifted “a kindly warder,” with a specially inscribed copy of Tolstoy’s book, The Kingdom of God is Within You.

Before he was sentenced to spend six years at the Yerwada prison in 1922, the British Judge Broomfield said: “If the course of events in India should make it possible for the Government to reduce the period and release you, no one will be better pleased than I.”

The Mahatma intensely valued and respected the linguistic diversity that constituted the nation. He was, by birth and upbringing, already fluent in Gujarati, Hindi and English. Since many of his compatriots in South Africa were Tamilian, at a meeting, when the crowd clamored that Gandhi speak in Tamil, the leader replied that he would learn the language if sent to prison again.

During a prison term in India, he valiantly attempted to master Urdu, even dispatching Urdu letters to an expert for feedback.

Besides, prayer, reading, writing (he wrote letters, books, even a guide for the students of his Ashram school), studying and spinning, he also ensured he walked briskly between meals, keeping his fitness at optimal levels.

Gandhi deeply valued the solitude and sparseness of prison life

With his constant striving for self-improvement along with pursuing rights for communities, Gandhi seemed to view prison sentences not merely as punishments, but even as necessary reprieves from the incessant busyness outside. During one of his terms, he even developed a new hobby: star gazing. As the fortunate recipient of two telescopes, he spent many nights in the prison courtyard, peering into the skies.

In a speech once, the Indian leader contrasted Western Civilization, which was “restless, energetic and centrifugal, with Eastern Civilization, which was contemplative and centripetal.” Once on a voyage to London, where he felt overly cossetted in the First Class, he seemed to genuinely miss his time in prison. “My prayers here lack the depth, the serenity and concentration they had when I was in gaol.”

Ensure Occasional Retreats from The Tugs of the Workplace

Like Gandhi, modern leaders like Bill Gates and Mark Zuckerberg have articulated the need to retreat into isolated spaces to think, in the absence of contending opinions. Such retreats need to be solitary, rather than being family vacations, which often impose a competing set of demands.

Since psychological studies have shown that power corrodes empathy, leaders should every and now then, inhabit the situations of the least powerful stakeholders in their organization. If going incognito is not feasible, at least frequent, informal conversations with employees at all levels can offer significant insights. Moreover, leaders who engage in physical work, like Gandhi actively did, can reinforce the dignity of labor.

Despite Occupying Socially-Envied Positions, Continue to Strive for Self-Improvement

Many leaders, including the TATA Sons’ Chairman, N Chandrasekaran, who recently clocked his “personal best” at the Mumbai Marathon, are conscious of staying physically fit. Others engage in mindfulness exercises or meditation practices to optimize other aspects of the self for strategic forays.

Continue to Learn Intensely and Across Varied Domains

Like Gandhi, leaders should study domains unrelated to their sphere of influence. Such offbeat exposure can result in unique insights, exemplifying the genius of the nation’s singular founder.